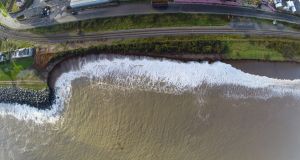 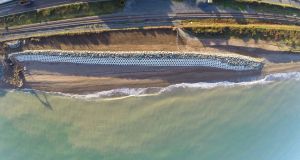 Recent storm damage has again brought the sea to within a few metres of the east coast railway line, causing damage to coastal defences between Greystones and Wicklow town.

Iarnród Éireann says the damage coincides with railway protection works already being undertaken near Kilcoole, and further damage was caused to an area known as the Murrough, an internationally recognised wetland north of Wicklow town.

The damage occurred during Storm Angus which saw storm force 10, northeasterly winds on the Irish Sea last Monday, November 21st, forcing a Stena ferry that could not dock in Fishguard due to safety concerns to overnight off the Welsh coast in Cardigan Bay.

The storm also caused extensive damage on Irish and British coasts with high winds and high tides pushing waves on to the railway track south of Newcastle, Co Wicklow. When the storm receded the coast was eroded to within 2½m of the railway line, in parts.

Damage was reported to be most severe close to Wicklow town, just north of a site where extensive repairs have already been carried out.

Use slider to compare

Last January, Iarnród Éireann placed almost 2,500 tonnes of rocks on the beach in an emergency bid to protect the railway line, adding 185m of rock armour to earlier coastal defences put in place in 2009, after clay cliffs collapsed.

The railway line effectively forms the seaward, or eastern boundary of the Murrough, a 15km coastal wetland area extending north from the town. The Murrough is the largest coastal wetland complex on the east coast and an EU designated Natura 2000 site. It supports a diversity of plant and animal wildlife. However it is largely flat and only a few feet above sea level making it extremely vulnerable to storm damage.

Iarnród Éireann said it was apparent that “emergency intervention was required immediately to retain what was left of the land between the sea and the railway”.

During last week’s storm there was extensive movement of sand from Greystones along the coast to Wicklow town with many areas of rock exposed. In Greystones, Cllr Derek Mitchell expressed concern about the erosion and welcomed the intervention of the railway operator.

“Iarnród Éireann is protecting the rail line along Greystones’ south beach for about 300m with steel piling and rock armour. This work will take until Christmas together with more protection further south towards Kilcoole,” he said.

Concern has also been expressed for homes in the Kilpatrick area in north Co Wexford where a closed coastal road has fallen further into the sea in the recent storm.

Iarnród Éireann said it had been protecting the railway line on an emergency basis over the years, largely with special funding from government. But a spokesman said ongoing protection for the railway line would have to form part of national anti-flooding measures.