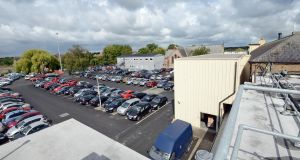 Members of the trade union Impact working at St James’s Hospital in Dublin have voted overwhelmingly for industrial action in a row with management over proposals to charge staff up to €500 for car parking.

Members of Siptu at the hospital have already backed industrial action in the event of the charges being introduced.

Impact said the vote for industrial action which was counted on Friday was carried by 91 per cent.

The union has about 470 members working in the hospital, many in clerical and administration positions.

Management at St James’s told staff just before Christmas that the planned introduction of car parking charges was linked to the construction of the new National Children’s Hospital on its campus. It said the development would result in a significant reduction in staff parking capacity.

While charges have not been introduced as yet, the unions believe they now have a mandate to fight any such move.

Impact assistant general secretary Catherine Keogh said the key issue for staff was that management failed to consult with them about the proposed charge. “This is effectively a pay cut by another name, as staff would have to earn €800-1000 in wages to cover this cost.”

Ms Keogh said discussions were continuing with management about the proposed charges.

1 Caroline Flack death: Public disquiet over media conduct grows
2 Storm Dennis washes abandoned ‘ghost ship’ onto rocks off Co Cork
3 Over 2,000 buyers bid for first affordable homes planned for south Dublin in years
4 Forget a grand coalition – here is what the next government will most likely look like
5 Fine Gael faces internal resistance to a grand coalition with FF and Greens
Real news has value SUBSCRIBE