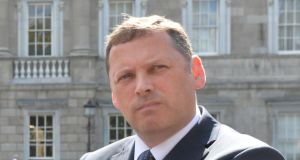 Fianna Fáil environment spokesman Barry Cowen who challenged claims about how much would be raised by a tax on new developments. Photograph: Alan Betson/The Irish Times

A “rolling fund” allowing local authorities to buy derelict sites and sell them, or build social housing on them, would be much more effective than a derelict sites levy, politicians have been told.

Mary Hughes, president of the Irish Planning Institute, told TDs and Senators that proposals for a derelict sites levy in the new Planning and Development Bill were fraught with difficulty.

Problems with title and finance were behind most derelict sites and an extra fiscal charge would not change that, Ms Hughes said. But she said a streamlined compulsory purchase system and a fund which allowed local authorities to acquire sites, could be very effective.

TDs and Senators at the Oireachtas Committee on Environment were also told by the Construction Industry Federation that boom-time development levies, onerous provision for social housing and VAT prevented the delivery of new homes.

Hubert Fitzpatrick of the federation said the new Bill proposed a reduction in the level of social housing required in new developments, from a maximum of 20 per cent to 10 per cent.

Mr Fitzpatrick said proposals in the new Planning Bill to abolish provision for monetary payments to local authorities instead of social housing were regrettable. He said many new developments had an annual management charge for residents which could be about €2,000 a year. He asked if local authorities would be prepared to pay that for the local authority tenants.

However, Fianna Fáil’s Barry Cowen said he would like to see more information on how Mr Fitzpatrick arrived at the figures of €60 million and €80 million.

Sinn Féin’s Brian Stanley said he was shocked. “The rules of engagement here prevent me saying exactly what I want to say to you,” he told Mr Fitzpatrick.

Mr Stanley said construction industry members – “your members” – had left housing estates unfinished for up to eight years while bonds supplied by developers had lapsed and proved worthless. He said Construction Industry Federation members were obliged to create the infrastructure house buyers had paid boom-time prices for.

He added that Part 5 of the Planning and Development Act provided for a good social mix by “peppering” social housing throughout private estates.

Conor Skehan, chairman of the Government’s advisory body, the Housing Agency, said it was important to see Part 5 as part of a more complex suite of measures to provide social housing and he urged politicians to let it stay in the forthcoming Bill.