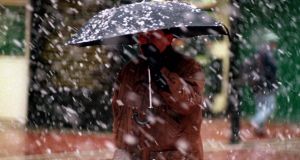 Met Éireann has predicted showers in Ulster, Munster and Connacht will spread to the east on Tuesday. Photograph: Paddy Whelan/The Irish Times

Snowfall was reported in Coleraine, Co Derry, while the national forecaster said that heavy rain in Connacht, Ulster and Munster will spread east as the day continues.

It said that the showers would be wintry in parts, especially in Ulster, with a risk of thunder.

Highest temperatures will range from 8 to 11 degrees during the day.

Heavy or thundery showers in the evening will lead to clearer spells with scattered showers in western and northern areas.

Temperatures will dip overnight and range from 0 to 3 degrees, with frost and icy patches expected.

Wednesday is predicted to start off dry, with showers of rain and hail in the west again spreading to the east and becoming widespread.