Man (55) dies in hospital after being airlifted from sea off Inishbofin, Co Galway 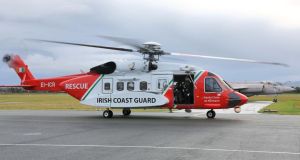 The man was airlifted from the sea close to Inishbofin, Co Galway to Mayo General Hospital in Castlebar. Photograph: Colin Keegan, Collins Dublin

A man who died after he was airlifted to hospital from the sea close to Inishbofin, Co Galway yesterday evening is the sixth diver to lose his life in Irish waters in the past month.

The 55-year-old man got into difficulties while diving with a group that had been in the area for a number of days.

Members of the Clifden- based RNLI lifeboat assisted in the rescue off Davillaun Island, an uninhabited location some 1.5km off Inishbofin around mid-afternoon. The alert was raised by dive vessel Sunglass shortly after lunchtime yesterday when a diver was said to be in difficulties shortly after surfacing from a 40-minute dive with a controlled ascent.

The Inishbofin nurse was transferred to the dive vessel, and a doctor was taken out with a defibrillator.

An Irish Coast Guard helicopter airlifted the man to Mayo General Hospital in Castlebar, where he was pronounced dead. His name was not being released until relatives had been informed.

Comhairle Fo-Thuinn/Irish Underwater Council national diving officer Dermot Moynihan said the diving community was “devastated” by the “unprecedented” number of fatalities in the past month.

“Three of the incidents were deep dives and the casualty over the past weekend was hit by a freak wave on the surface.”

“We conduct extensive training in coping with difficulty and getting to the surface safely, and always diving with a buddy, and we put out regular reminders to our members,” he said.

A month ago yesterday , on June 14th, a 45-year-old Co Limerick man got into difficulty when diving on a German U-boat wreck off Roche’s Point at the mouth of Cork harbour; and a Polish national, also aged 45, died a day later near Inishtrahull, off Malin Head, Co Donegal.

They were among a group exploring the German U260 submarine wreck lying in 42 metres of water some 6km off the west Cork coast.

Over the weekend, experienced diving instructor Rev Dr Stewart Jones (57) of Donemana Presbyterian Church near Strabane, Co Tyrone, died after he was struck by a freak wave.

Dr Jones, chaplain at Altnagelvin Hospital in Derry, had surfaced from a second dive off St John’s Point, Co Donegal.

Irish Water Safety chief executive and former Naval Service diver John Leech has pointed out the importance of repeated time in the water and physical fitness.

Breathing gases under elevated pressure runs the risk of narcosis, where mental, sensory, cognitive and motor activity can be impaired or diminished.

Figures published yesterday by Irish Water Safety for 2013 show the lowest total number of drownings recorded for 78 years – at 91 in total.