Six Nato vessels in Dublin open to public over weekend 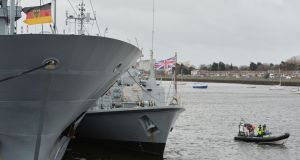 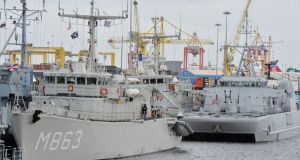 The Standing Nato Mine Counter Measures Group 1 vessels, moored in Dublin harbour, are open to visitors on Saturday and Sunday from 2pm to 4pm. Photograph: Alan Betson/The Irish Times

Six Nato ships are berthed in Dublin for the weekend and will be open for viewing to the public.

The ships, attached to Standing Nato Mine Counter Measures Group 1, will be berthed in Dublin until Monday at 10am. All ships will be open to visitors on Saturday and Sunday between 2pm and 4pm beside the East-link bridge.

The fleet engages in minehunting exercises, which involves dealing with historic maritime weaponry such as unexploded bombs, torpedoes, shells and mines from the two World Wars.

The fleet is part of the “enhanced high readiness Nato Reaction Force” and provides a “crucial element to Nato’s capabilities in area access and area denial operations”, according to the organisation.

The ships also take part in different multinational exercises and train with Nato members and partners.

The fleet was established in 1973 primarily to ensure the safety of navigation and approaches to ports in the English Channel and the northwest of Europe, as well as in the event of conflict with states aligned to the Warsaw Pact.

In a statement, Nato said defining new threats led the team to become a “global-scale group” which can operate in almost every corner of the world.

Due to the fact the group consists of ships from different Nato members, its command changes annually.