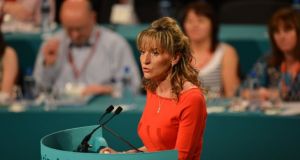 The Sinn Féin MLA Martina Anderson has apologised for a controversial tweet in which she said a payment scheme for victims of the North’s Troubles was “mainly for those who fought Britain’s dirty war in Ireland”.

Victims groups and other political parties had condemned the social media message and called on Ms Anderson to apologise.

The Foyle MLA said she apologised “unreservedly for the hurt and offence caused by my tweet to people who suffered serious harm during the conflict here.”

She described her comments as “clumsy” and “not directed at them”, saying it was “never my intention to cause them any hurt.

“All victims of the conflict deserve acknowledgement of their pain and loss and I support them in their efforts to get their pension,” she said.

In the tweet on Tuesday, which has since been deleted, Ms Anderson also said the estimated £800 million (€889 million) was “mainly 4 those involved in Collusion … mainly 4 British Troops like Paras who murdered ppl on Bloody Sunday and Ballymurphy … mainly to discriminate, criminalise and exclude.”

Victims campaigner Alan McBride, of the WAVE Injured Group - which campaigned for the introduction of the victims’ payment scheme - told the BBC the tweet was “insulting and offensive and also inaccurate” and said Ms Anderson “should have the moral courage to stand up and say she got this very, very wrong.”

Sinn Féin president, Mary Lou McDonald, told RTÉ’s Today with Claire Byrne Show that she had spoken to Ms Anderson and her apology was “absolutely necessary.”

“I know that it was not her intention to cause that kind of hurt but it was caused so she has apologised for it and it’s quite right,” she said.

Asked to clarify that it was not Sinn Féin’s position that the pension was mainly for those who fought a “dirty war” or were involved in collusion, Ms McDonald replied that “when you look at the scheme itself what you find is that British soldiers, including those that came onto the streets of Derry and Ballymurphy and so on, all of those will be eligible for the pension, and many others weren’t, including people who were grievously harmed because they come from a republican background, people who were interned, so that is a problem and it’s not simply a Sinn Fein problem.”

This, she said, was a cause of concern and “something that we’re going to have to deal with, but for now those who took the case and who were hurt are absolutely entitled to their pension.”

“I contacted party colleague Martina Anderson yesterday evening and told her that her tweet was ill-considered and would cause hurt and offence to victims,” she said. “I told her she should delete the tweet.

“Martina has since apologised. Let me restate that all victims deserve acknowledgement of their loss and pain and both I and we in Sinn Féin support them in their efforts to get what they are entitled to.”

Earlier, Ms O’Neill said: “As joint head of Government I remain committed to delivering a Victims Payment scheme, which is needs based and open to all who were seriously physically and psychologically injured during the conflict.”

There has been political disagreement over whether anyone convicted of inflicting serious harm during the Troubles should qualify for payments, and over who should fund the scheme.

Justice Minister Naomi Long has said the payments to the most badly hurt could cost £800 million (€889 million).

Last week, Sinn Féin’s vice-president was highly criticised by the High Court for refusing to comply with a legislative requirement to set up the scheme to gain political leverage over the UK Government.

The joint legal challenge against the delay was brought by Jennifer McNern, who lost both legs in a Troubles bombing in 1972, and Brian Turley, one of the “Hooded Men” who were arrested and interrogated by the British Army in 1971.

The scheme was due to open for applications at the end of May but little progress has been made due to a failure by the Executive Office (TEO) which is shared by Ms O’Neill and First Minister Arlene Foster, to nominate a Stormont department to take responsibility for it.

SDLP leader Colum Eastwood said: “The comments made by Martina Anderson this evening are unacceptable, disgusting and grossly insulting to hundreds of victims who sustained life-changing physical and psychological injuries related to Troubles incidents.”

“People who have lived most of their lives with shrapnel from an explosion in their body or who are haunted with the smell, taste and noise of a bombing should not be labelled by Martina Anderson.”

“Sinn Féin is clearly so committed to justifying the murderous criminality of the IRA which murdered and injured so many innocent people, that it is prepared to continue to slur its victims,” he said.

“They are without shame and demonstrate an appalling lack of humanity.”