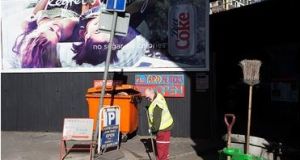 Department of Public Expenditure and Reform said the number of days lost to sick leave per full-time equivalent jobs across the public service had fallen by 1.0 days to 8.5 days. File photograph: Getty Images

Rates of sick leave in parts of the public service remain high, Minister for Public Expenditure and Reform Paschal Donohoe has said.

However, reforms to sick leave arrangements introduced in 2014 had generated significant savings for the exchequer, he added.

New figures released on Friday by the Department of Public Expenditure showed that, overall, the level of sick leave across the public service has fallen below 4 per cent for the first time.

The figures published by the department revealed that, on average, 10.2 working days per full-time employee were lost in the Civil Service in 2015.

However, the department figures showed that within the Civil Service, areas such as the Irish Prison Service, the Department of Social Protection, the National Council for Curriculum and Assessment and the Revenue Commissioners all reported higher levels than the average.

A spokeswoman for the Minister said that across the wider public service “areas such as the health sector and the Civil Service have higher average rates of days lost, but management in all areas will be working to further reduce rates of sick leave and absenteeism through the development of targeted strategies”.

Significant savings have also been achieved through changes. The department said that since reforms to sick leave arrangements were introduced in 2014 - which effectively halved entitlements - the cost to the State had fallen by more than €104 million to €317.9 million.

The department said the number of days lost to sick leave per full-time equivalent jobs across the public service had fallen by 1.0 days to 8.5 days.

In a statement, Mr Donohoe said: “While there has been a significant improvement since the reform, the rates of sick leave in areas of the public service remain high and need to be reduced further.

“To achieve this, management in each of the sectors must focus on the proactive management of absenteeism, and policies designed to assist employers in managing cases of prolonged or frequent absence proactively will be required.

“This will be a key recommendation in the review of the operation of the sick leave scheme, which is being undertaken by the department.”

He said his department would be establishing a public service sick leave management forum “to provide ongoing support for each of the sectors in managing sick leave in their respective sectors, including the identification of the underlying causes of sick leave and the development of targeted strategies aimed at further reducing sick leave absences.”

He said a target for the rate of sick leave would be set within each of the sectors and this would be monitored on an annual basis.

“It is also intended for the sectors of the public service to publish sick leave absence rates on an organisational/regional basis, where figures are available,” he added.