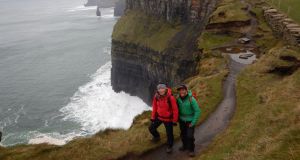 Multiply Croagh Patrick by 11 and a bit, and that’s the sort of environment that Mingma Tsiri Sherpa and six of his siblings spend their working days in.

The seven sons of Nima Chhiri Sherpa have accumulated 56 trips to the Everest summit, a sibling record. So a run up the Reek may sound like a bit of a busman’s holiday, but the Nepalese visitor says he was struck by the beauty of Mayo’s holy mountain.

“It’s because you can see the sea,” he says, recalling his first glimpse of Clew Bay on a visit to Croagh Patrick. Nepal is entirely landlocked, and so, for him, a hostile Atlantic on a stormy January day holds a special magic.

He and his younger brother Pasang are on their first visit to Ireland at the behest of Irish Everest summiteer and work colleague Cian O’Brolchain, who climbed the 8,848-metre Everest with them in 2012. O’Brolchain feels very privileged to have been in such company, given the wealth of their experience.

Mingma, who has summited 19 times, was one of the first Nepalese to climb the world’s second-highest peak, K2. He was on the mountain during the fatal 1996 season – recently featured in the film Everest – when he spent 48 hours in thinning air above 8,000 metres, rescuing visiting climbers.

His brother Pasang is training chief with the Nepal Mountaineering Association and his wife, Dawa Yangsum Sherpa, was the first Nepalese woman to climb K2.

Since they arrived several weeks ago, they have heard Sharon Shannon playing in Tipperary, met members of Mayo Mountain Rescue and felt the full blast of the elements from the Cliffs of Moher, navigating many spot floods en route.

They have more than a passing empathy with those recently affected by the elements here, for they have experienced much worse trauma. More than 8,000 people were killed and millions left homeless when a 7.8-magnitude earthquake and 7.3-magnitude aftershock struck last year. The brothers were with a group of clients at base camp when they felt the first quake on April 25th. Some 18 members of climbing expeditions were killed and many were injured. There was pandemonium – “a lot of bleeding” – but “everyone helped, and it was so lucky that it happened during the daytime”, they say.

The brothers, who run their own trekking and expedition company, Ascent Himalayas, had been hoping for a better season after a devastating avalanche the previous year. On April 18th, 2014, 16 Nepalese guides died after a serac, or large ice formation, broke off the mountain’s western shoulder.

“Seven of those 16 guides had trained with me,” Mingma says. Many families were left virtually destitute, having lost their sole breadwinner. Since the earthquake, the brothers have been working to help reconstruct villages in their Rolwaling valley home. One initiative was funded with Irish donations. So many Irish trekkers and mountaineers have visited Nepal over the decades – both before and after the first Irish Everest summit by Dawson Stelfox – that the bond between the two countries is very close

Nepal Ireland Society president Deepesh Man Shakya pays tribute to this Irish involvement. To date, Ireland has contributed €12 million to Nepal for earthquake relief, he says, with €1.5 million coming from the Government.

The visiting Sherpas have one message for Irish people who wish to assist.

“The Nepalese economy is very dependent on tourism, and we really rely on people who are not only climbing mountains, but are interested in trekking and culture,” they say.

So, saving up for a return plane ticket to Kathmandu is, they say, “the best way you can help us to rebuild our country right now”.

The brothers give their last presentation in Ireland at the Great Outdoors, Dublin 2, on Wednesday, January 13th. Booking is essential; details can be found at facebook.com/cian.obrolchain.