Shankill bomb link to RUC informant to be investigated 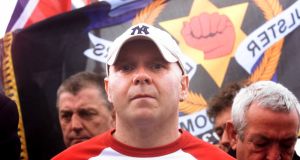 Loyalist paramilitary leader Johnny Adair was one of the targets of the 1993 IRA bomb in Belfast. Photoghraph: Cathal McNaughton/Getty Images

Allegations that the IRA’s 1993 Shankill bombing was planned by an RUC informant and could have been prevented are to be examined by the NI Police Ombudsman.

Encrypted files stolen by the IRA from Castlereagh police station in 2002 were later used to uncover the informer, a leading figure in north Belfast, the Irish News reported.

The newspaper said it had seen documents which showed the IRA commander was in contact with his handlers in the run-up to the bombing and passed on details of “scouting missions”.

A man who lost his wife and father-in-law in the bombing doubted if he could go on living in the North if it turned out the RUC could have prevented the atrocity.

Alan McBride, whose wife Sharon died in the attack on Frizzell’s fish shop on the Shankill Road, last night said it was vital that the report be thoroughly investigated.

Mr McBride’s father-in-law and owner of the shop Desmond Frizzell was also killed. Ten people died in the blast including one of the two IRA bombers, Thomas Begley.

Mr McBride who works with the Wave victims’ group said he was horrified by the claim. “If there is evidence to connect this guy with the bomb and also with telling his handler, whether from MI5 or RUC Special Branch, that there was going to be a bombing on the Shankill Road and the police or MI5 sat on this information, then I think that is absolutely morally repugnant,” he said.

Mr McBride said he was aware of reports that informants used by police and the British army had been involved in killings themselves, but this was the first time the matter was so personally “brought home” to him.

“If I thought for a minute that the police were involved in that it is just, I mean, I don’t know if I would want to remain in this state if that is the way the authorities behaved,” said Mr McBride.

Ten were killed in the blast including two children aged seven and 13. A second bomber, Seán Kelly was injured but survived the explosion.

Irish News security correspondent Allison Morris reported that the former IRA commander in Ardoyne in north Belfast was now in his late 50s and that he was a former “blanketman” who participated in the “dirty protest” campaign for special non-criminal status for republican prisoners in the mid 1970s into the early 1980s.

The paper reported that the documents were heavily encrypted but that the IRA was able to decipher them. It led to the senior IRA figure being stood down by the IRA’s army council in 2002, it reported.

Police Ombudsman Dr Michael Maguire has received a complaint that the RUC had information that could have prevented the bombing, his office said yesterday.

“We have only just received the complaint. It now has to be assessed to determine whether it should and can be investigated and, if so, when that investigation could begin,” a spokesman said.