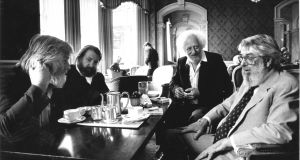 On Good Friday 1988 Dessie Hynes found himself serving Ronnie Drew fake gin and tonics in a packed O’Donoghue’s. That day the band were filming part of a documentary called The Dubliners’ Dublin.

Coincidentally, it was the morning after the legendary publican sold the bar – one that had become famous because of its eclectic collection of customers, after 12 years of ownership.

“[Dubliners’ manager] Jim Hand came in at around eight in the morning and said, ‘Listen Dessie you’re not to give Ronnie any drink today,’” remembers Mr Hynes.

“Then Ronnie’s wife came in at around 10 and she said ‘For God’s sake Dessie don’t give him anything today. He’ll want to have gin and tonic all day.’ Then Ronnie came into me and said, ‘Don’t mind them, I will want a drink.’”

So Mr Hynes served him a gin and tonic and then put some sliced lemons in a bowl of gin, put three gin bottles filled with water up on the optics and began serving the Dubliner water, tonic and gin-infused lemon (“He’d bite the lemon first and that tasted of gin”).

The rest of the band and their friends were on pints. At about two Drew realised he wasn’t remotely drunk. “He said some nice words to me then,” says Mr Hynes. “‘You’re a desperate f****r! You’re not giving me gin, you bollocks!’” He laughs. “I’ve no recollection how he fared after that.”

Mr Hynes is now 88, retired and living in Rosslare. “I think I’m already in heaven here,” he says.

The Good Friday drinking ban has been in existence since 1927, so other Good Fridays were quieter affairs for Mr Hynes, even if most pubs didn’t quite stop serving during his time in the business.

“I don’t think there was ever a Good Friday in my lifetime that we didn’t have someone knock on the door. . . . [then] the word would get around you were working. People in my business, and yours, they like to get a drink . . . if you happen to be living over the premises, and a lot of publicans did back then, then you were in persecution land, because a lot of fellas would just call by on Good Friday.”

What are your memories of Good Fridays past? Are you happy or disappointed about the new law?

“They’d say, ‘Oh Jaysus, give us a pint would you? If anyone comes in tell them I’m one of the cleaners.’”

It was usually just a handful of respectable professional people, he says. “They were used to coming at lunch for sandwiches – we did great beef sandwiches in O’Donoghue’s – and while they were there they’d have a pint or two or three before going back to the office.

“They weren’t going to be able to break from that on Good Friday. Most publicans would have six to 10 guys who’d come in talking about horses and football and life. You have to pass the time with some damn thing, you know?” Even some of the guards, he says, “if they came to inspect the place they were really coming for a fecking drink.”

For most barmen, Good Friday was largely an opportunity to clean the pub and anyone who came in for a not quite legal pint had to have it amid the cleaning activity.

“Publicans were delighted with the day off,” he says. “We’d get in steam cleaners. We’d hose down the floors. Though we never did much painting . . . Once a health inspector came in and looked worried. The roof hadn’t been painted for 55 years and there were cobwebs all over it. He said, ‘You’re going to close down and get it painted.’ But I said it to the lord mayor, who had a senior guy come in to say, ‘Don’t pay any heed to that guy.’”

Mr Hynes thinks Irish people traditionally drank as much on Good Friday as on any other day, but they had to be a lot quieter about it. Even then people stocked up on drink for house parties.

And there were then, as now, exceptions to the Good Friday prohibition. “A lot of guys I knew used to take the train to Rosslare or they’d go on the boat from Dublin to Holyhead and would drink their way there and drink their way back and forget they had even gone there.

I don’t know why publicans want [the Good Friday drinking ban] done away with. It didn’t really cost you any money

“They’d do the same with the dog show in Ballsbridge. You couldn’t get into that. There’d be queues of people. It was the biggest show in Dublin because of the day it was on and there was drink allowed there.”

There were other strange alcohol restrictions, Mr Hynes tells me. When he started working in the pub trade in Kildare in the 1940s, on Sundays publicans could only serve alcohol to people who were travelling.

If the guards came and saw a full pub, the clientele had to prove their homes were a mandated three miles away. “The guards maybe had less to do then,” he says, “because the next day they’d measure it. If your front door was a few yards short of three miles you had to go to court.” People would cycle from three miles away and then “they wouldn’t always be able to cycle home”.

Mr Hynes continued running bars until the late 1990s. He retired more than once, so there have been a few newspaper articles about him titled, “He’s Pouring his Last Pint”.

He recalls the different premises he owned around the city including the original Three Tun Tavern in Blackrock (“Blackrock is all seagulls and pubs and seagulls don’t go to pubs”) and The Park Inn in Harold’s Cross (“We did 45 funerals a week”). In the early days, he says, so many establishments passed through his hands that he didn’t know if he was in the business of selling drink or selling pubs.

“I don’t know why publicans want [the Good Friday drinking ban] done away with,” he says. “It didn’t really cost you any money. [Publicans] got what people had to spend.”

A lot of barmen welcomed a day of relative ease, he says. “If you look at Christmas, an enormous amount of publicans close at 5.30pm on Christmas Eve and shift their customers to go to their own houses just to get home. I suppose it’s not as much of an owners’ business as it was. Bars are now being run by banks and accountants. It doesn’t have the same type of humanity that it had.”

But they often served people on Good Friday nonetheless? Yes, he says, “because you had respect for your customers, you never said ‘Would you ever f**k off?’ Even if you wanted them to.”