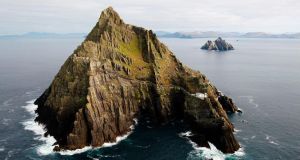 A specialist team sent on to Skellig Michael to assess a major rockfall on the Kerry island earlier this month has completed its work, improving the chances that it will reopen to the public as scheduled on May 14th.

The Office of Public Works said a safety access team has surveyed slopes affected by the second major rockfall in two years on the island and resolved areas where there was suspected loose material.

Staff from the agency are carrying out normal pre-season checks and making visitor-accessible areas on the Unesco World Heritage site, which is featured in the latest Star Wars movies, safe to use.

The reopening of the fragile island, located 12km off the coast of Co Kerry, will depend on the weather; the OPW said a prolonged wet period may affected areas stripped of vegetation and “remain somewhat vulnerable”, but that it was “cautiously optimistic” it would reopen as planned.

“The OPW reminds potential visitors that the island remains in an extremely dangerous condition and should, under no circumstances, be accessed by anyone other than the official project team and their contractors,” the State agency said.

Staff are continuing to remove the rockfall material, estimated at more than 30 tonnes, from the Lighthouse Road, which does not form part of the main visitor path on the island.

The Skellig, home to a monastic settlement of the early Christian period, has grown in popularity with tourists since the filming of scenes for the last Star Wars movie, The Force Awakens. Filming for the forthcoming Star Wars episode, The Last Jedi, also took place on the island, in 2014 and 2015.

The island, the fictional refuge of Star Wars character Luke Skywalker, featured prominently again in the recently-released trailer for the new film, which will arrive in cinemas in December.

Visitors to the Skellig increased by more than 1,000 last year on the number in 2015. The official count had reached 13,500 by mid-September ahead of the closure of the island in October.

The rockfall, discovered earlier this month during preparations for the reopening, was caused by winter storms and rabbits burrowing rather than filming activity or the increased number of visitors.

The OPW also awarded 13 permits to boatmen allowing them to take visitors to the Skellig, bringing to 15 the total number of permits issued. A total of 22 applicants applied under a competition held every three years to limit the number of operators to avoid putting undue pressure on the island.

One successful applicant, David Walsh, who is charge of a new boat, Force Awakens, was optimistic that the island would open soon and that the boatmen would feel a financial force this season.

“Hopefully now – it should be alright,” he said. “It should be fairly good once we get the weather.”

Mr Walsh’s boat is owned by New York-based property developer Kevin O’Sullivan who, with his brother Donal, unveiled plans last week to build a skyscraper of between 30 and 40 storeys at the Port of Cork City, which would make it one of the country’s tallest buildings.

The O’Sullivan brothers, natives of Ballinskelligs in Co Kerry who have lived in New York since the 1980s, own Time Square Construction in Manhattan which worked on the Freedom Tower and 9/11 memorials in New York and Apple’s flagship store near Central Park in the city.