Fears expressed by some members of Cabinet about safety

Minister for Health Simon Harris has apologised for not providing more information in his response to a Parliamentary Question about the cost overrun for the national children’s hospital in September last year. Video: Oireachtas TV 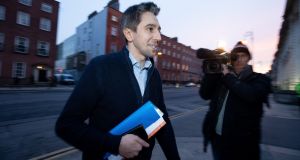 Ministers discussed the episode which saw protesters block Mr Harris, his wife and their three-week-old daughter in their home in Greystones, Co Wicklow. Photograph: Tom Honan

A senior member of An Garda Síochána is examining security for Ministers, the Cabinet has been told, days after a protest outside the home of Minister for Health Simon Harris.

Ministers yesterday discussed the episode which saw protesters block Mr Harris, his wife and their three-week-old daughter in their home in Greystones, Co Wicklow.

About a dozen anti-austerity protesters held banners outside Mr Harris’s home on Sunday. Gardaí said the demonstrators left the scene peacefully after an hour.

Sources said fears were expressed by some members of the Cabinet that they could be at risk of similar incidents, and it was noted that Irish politicians are accessible to voters.

Taoiseach Leo Varadkar spoke on the issue at Cabinet, as did Minister for Justice Charlie Flanagan. Mr Flanagan said an assistant commissioner in An Garda Síochána is examining ministerial security arrangements, although it is understood he did not get into specifics.

Sources said Mr Flanagan’s comment was vague and may not have been intended to give much detail away.

One source said the families of Ministers had become concerned and anxious at the latest developments, and at previous reports of female Ministers also being targeted.

Some sources said it was mentioned in passing at the meeting that Cabinet members used to have full-time Garda drivers who also served as ministerial protection.

The Fine Gael-Labour coalition replaced Garda drivers with ministerial drivers in 2011, although some senior figures – such as the Taoiseach, Tánaiste and Minister for Justice – have Garda protection.

Some Ministers have also had the risks to them assessed by An Garda Síochána.

He said a legitimate protest is something that has a very important role in a democratic society. “What happened yesterday to myself, to my wife, to my young baby and to our neighbours was not protest , was absolutely not protest. And I really think it raises a very important question about the tone of political debate and discourse and perhaps media discourse in this country as well,” he said.