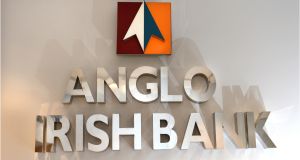 Large pension funds, insurance companies, asset managers and banks in Europe were among those who owned €10 billion in senior bonds in Anglo Irish Bank in 2010, according to a note from a senior Department of Finance official.

There has long been controversy about the fact that no losses were imposed on bondholders in the bust bank, particularly those who remained holding the bonds when Ireland entered the bailout later that year.

By that time around half the total €10 billion had been repaid as the bonds matured.

The details are revealed in a note, written in March 2010, from a senior Department of Finance official to an official who had asked on behalf of then communications and energy minister Eamon Ryan, who is now Green Party leader.

Among the major holders were a Dutch pension fund, ABP; another Dutch fund, PGGM; LGPI in Finland, which manages local government pensions; and a Swiss public entities pension.

A number of major asset managers were also named, including JP Morgan in London; DeKA and ADIG, two German investment managers; and Robeco from the Netherlands.

Big insurance companies, including Munich Re, Llmarinen from Finland and German giant Axa were also named , along with big banks such as BNP, SocGen, ING and Deutsche.