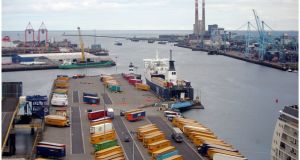 The Irish Road Hauliers’ Association has sought clarity from the Department of Transport on whether drivers can get single cabins on ferries or be allowed to sleep in their trucks. Photograph: Bryan O’Brien

Truck drivers have complained that they cannot get clear directions about Covid-19 safety rules from the Government on how they can be protected on the road in order to safeguard Irish supply chains.

The Irish Road Hauliers’ Association (IRHA) has sought clarity from the Department of Transport on whether drivers can get single cabins on ferries, or be allowed to sleep in their trucks, which they cannot do now.

The association also wants measures to protect drivers and cargoes if a driver falls ill on the road. Tachograph rules must be relaxed, too, if drivers are forced to drive for longer.

Incoming IRHA president Eugene Drennan said some ferries were now attempting to provide single cabins. However, he said truckers have looked for for clarity from the State for three weeks, without success.

Guarantees about cleanliness onboard ferries and in ports is needed, said Mr Drennan: “It’s very important that we can reassure our drivers that we have backup; if you get ill, Europe can get you out of that cab.”

Meanwhile, Seatruck Ferries, which operates routes Dublin/Liverpool, Dublin/Heysham and Warrenpoint/Heysham is to stop carrying HGV drivers and passengers onboard.

The temporary restrictions would “significantly impact on the Irish Sea supply chains”, it said, though industry sources believed other ferry routes have spare capacity.

Supply companies which normally send driver-accompanied vehicles on Seatruck Ferries services were offered the option of continuing to send their traffic, but on an unaccompanied “trailer-only basis”.

The company said “HGV drivers attending our terminals to drop and collect unaccompanied trailers should follow the normal and well-published Government guidelines to avoid further spread of the virus”.

Irish Ferries said they were continuing to operate haulier services as normal. A spokesman for Stena Line said the company would waive charges for any passengers wishing to change their booking dates.

The company will also offer each HGV driver a private cabin, but there would be no restrictions on passengers or lorry drivers for the moment.