Seanad move to National Museum building opposed by An Taisce 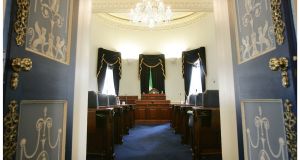 Under plans for the refurbishment of the Seanad chamber in Leinster House, Senators will move to the National Museum’s Ceramics Gallery next door on Kildare Street for up to two years. Photograph: Alan Betson

An Taisce has written to Dublin City Council pointing out the proposed, temporary relocation of Seanad Éireann to the adjacent National Museum building on Merrion Square, represents a change of use for the museum, and so requires planning permission.

Under plans for the refurbishment of the existing Seanad chamber in Leinster House the Senators would move to the National Museum’s Ceramics Gallery which is next door on Kildare Street, for up to two years. The cost of the move is in the region of €1.5 million.

However, in its submission to the city council’s planning department, An Taisce pointed out the museum is a protected structure. An Taisce drew the planners’ attention to proposals to breach the external wall of the museum in at least three places to facilitate an entrance/exit for Senators and the public.

An Taisce also said it was taking issue with the Government’s attempts to seek “exempted development” status for the works.

“Exempted development” is only permissible if the works would not affect the character of the structure, said Dr Mark Clinton of An Taisce’s monuments and antiquities committee.

Dr Clinton said “clearly the works envisaged will alter the character of the protected structure and permission for the works should not be given”.

The former director of the National Museum, Dr Pat Wallace, expressed concern last week regarding the move and the impact this would have on staff and the museum’s operations.