Seals give five stars to wild salmon in Irish waters 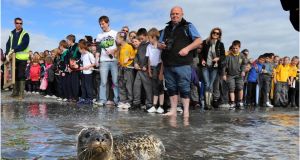 Fishermen have long blamed seals for reducing species that are fished commercially in Irish waters. Photograph: The Irish Times

Seals, often blamed by fishermen for depleting whitefish stocks, are innocent of the charge, but they are partial to a bit of salmon, according to a major study by researchers.

The study from Queen’s University Belfast, University College Cork and the Marine Institute found that grey and harbour seals have no “significant negative effect” on stocks.

Fishermen have long blamed the seals for reducing herring, mackerel, cod, haddock, whiting and 30 other species that are fished commercially in Irish waters.

The appetite of seals for whitefish has been a controversial issue in recent years, with Kerry inshore fishermen calling for a cull more than three years ago to curb their predatory impact.

The Fianna Fáíl MEP Mark Killilea proposed building a seal meat plant on the west coast to deal with the marine mammals once and for all, in spite of their protected status.  *

However, the study found that seals do create “significant problems” for fixed nets used by estuarine salmon fishermen, and may also affect numbers of wild salmon.

Seals do eat whitefish, but smaller, younger ones than fishermen are not allowed to catch, says lead researcher Dr Keith Farnsworth from QUB’s institute for global food security.

“Seals are often eating the same species of fish as we buy in the supermarkets, but younger versions of them,” he said, adding that seals “may actually be doing fishermen a favour” by eating species that prey on valuable stocks.

“The idea of seals being direct competitors with the fishing boats for the fish out there intuitively seems pretty obvious,” says Prof David Reid of the Marine Institute, “but actually, in this case, it is not really true.”

Two years ago, a pilot study undertaken by Bord Iascaigh Mhara with the Marine Institute and UCC noted that the economic impact of seals on inshore netting “may have increased substantially”. Stocks of pollock, hake and monkfish had all suffered significant predation from seals, though the latest research – published in The Journal of Applied Ecology – discounts the need for a cull. Meanwhile, the study found fishermen’s tangled nets snare and drown seals.