Safety measures at pier in Buncrana where family died 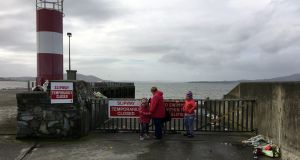 Slipway at Buncrana before the work was carried out: the gateway to it, which was open at the time of the tragedy last year, is to remain locked between 8pm and 10am. Photograph: Peter Murtagh / The Irish Times

The pier in Buncrana, Co Donegal where five members of one family died when their car slipped into the sea last March has been treated with chemicals in an effort to ensure such a tragedy cannot happen again.

The five drowned despite the heroism of a passerby, Davitt Walsh, who rescued Mr McGrotty’s baby, Rioghnac-Ann, when he grabbed her from the hands of her father as the jeep sank. Slippery algae has been blamed for the tragedy.

Donegal County Council carried out the work the day before the Buncrana-Rathmullan ferry service recommenced for the summer. The resumption of the ferry brings a sharp rise in the number of people using the pier.

A council official said further algae from lower down the slipway that could not be removed last week due to the neap tide was removed on Monday. “It is not possible to remove the algae that is under water,” he said.

New signs have been erected at the slipway. A gateway to it, which was open at the time of the tragedy last year, is to remain locked between 8pm and 10am when the ferry is not operating.

“The situation will continue to be monitored over the next three months, while the ferry is in operation. The ferry operator has signs in place to help control traffic wishing to board the ferry,” the official said.