Ryan resigns as head of City of Culture 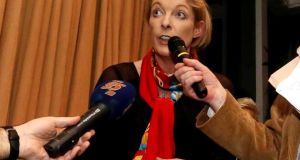 Embattled Limerick City of Culture chief executive Patricia Ryan has resigned saying that “speculation and commentary” about her €120,000 a year post in recent days had damaged her ability to do the job.

Controversy surrounding Ms Ryan’s appointment to the post has raged since it emerged last week that her 18-month contract was not advertised.

In her resignation statement she called for “a suitable successor” to be appointed “to lead out on the next important phase and ensure the delivery of the programme and the project which is so vital to the rebranding of Limerick”.

She paid tribute to the “exceptionally hard working team of people in City of Culture” and said their “dedication, diligence and commitment will ensure the continued success of this project.

The issue came to a head following the resignation of Artistic Director Karl Wallace and international programmer Jo Mangan and commissioning and legacy programer Maeve McGrath.

Calls for Ms Ryan’s resignation were made at a meeting of the artistic community attended by the CEO and Pat Cox, the chairman of the Board of Limerick City of Culture on Friday night.

Following the meeting Ms Ryan admitted the criticism was “tough to listen to” but insisted she would not be stepping down. “People that shout the loudest aren’t always the majority, can I just say that,” she added.

When asked if she would be happy to see Karl Wallace who who resigned as artistic director return to his position she said “that was a matter for Karl, Karl resigned”.

Mr Cox also insisted that he will not be resigning from his voluntary position as chairman of the board. “I know there are those who would like to see me fold in the face of criticism but I am determined to see this through,” Mr Cox said.

A former adviser to Pat Cox, Ms Ryan is a native of Limerick and has also worked as an advisor to Mary Harney when she was Minister for Health.

Limerick City and County Manager Conn Murray who recommended Ms Ryan for the post has defended the appointment and insisted he used a process which is “highly acceptable in context of the private sector” to ensure the most appropriate person was put in place to do the job.