Garda and police initially agreed there was no evidence on collusion 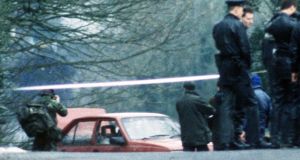 The car belonging to the RUC officers killed in the ambush. Photograph: Pacemaker

RUC Border superintendent Bob Buchanan’s job brought him into Garda and police stations on both sides of the Border, in an area notoriously dubbed “bandit country” in south Armagh.

The tribunal heard evidence Supt Buchanan had relaxed about coming south and he came frequently. However, his presence caused anxiety among gardaí in Border outposts .

Retired Garda SgtRay Roche told the tribunal that when Supt Buchanan called to the Hackballscross station, he “told him as diplomatically as he could” to leave, as Supt Buchanan was endangering both his own life and the lives of gardaí by his presence.

Another former garda, Larry Withrow, said than on an occasion when

Supt Buchanan had called to Dromad, the RUC officer had parked his car in front of the Garda station. Supt Buchanan, who was very friendly on the occasion and had said “call me Bob”, declined an offer to move the car to the back of the station out of public view.

But in March 1989, Northern secretary Tom King had expressed determination to stamp out cross-Border smuggling, which it was believed was financing the IRA.

Supt Buchanan was given the job of securing the co-operation of the gardaí for a crackdown, which the tribunal was told was aimed at Thomas “Slab” Murphy, a known republican in Co Louth whose farm straddled the border with Co Armagh.

Supt Buchanan travelled to Dundalk with Chief Supt Harry Breen on Monday, March 20th, 1989, and was killed about 15 minutes after leaving the station, on the Edenappa Road in south Armagh.

Within 14 hours the Irish Press had a front-page article raising the possibility of an IRA mole in Dundalk Garda station.

However, both assistant Garda commissioner Edward O’Dea, who immediately went to Dundalk, and then chief constable of Northern Ireland John Hermon, said there was no evidence of collusion.

But the rumours refused to go away and a 1999 book by British journalist Toby Harnden, Bandit Country: The IRA and South Armagh, carried allegations there was a leak from a garda in Dundalk station.

This was repeated by journalist Kevin Myers, in his Irishman’s Diary column in The Irish Times, in March 2000.

former Det Sgt Owen Corrigan of Dundalk Garda station as a man who passed information to the IRA.

A new Garda report by Chief Supt Seán Camon again concluded there was no evidence to support the allegations of collusion.

However, retired Canadian supreme court judge Peter Cory investigated a number of cases, including Breen and Buchanan. He recommended a full public inquiry.

The Smithwick Tribunal began with five years of private investigations. When it opened to public hearings in June 2011, it was expected to close by November.

However, there were allegations that some information from both the Garda and the PSNI was late to arrive.

After three extensions of time, Diarmaid McGuinness, counsel for the Garda Commissioner, accused the PSNI of introducing material at a late stage, failing to share intelligence, failing the Breen and Buchanan families and failing the tribunal.

And he said it was the submission of the Garda that there was nothing to support the claims that collusion leading up to the murders ever existed.