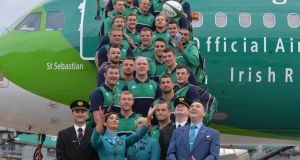 The Irish rugby squad board the Aer Lingus aircraft as they head to the World Cup in England in September. Although it did not end well, the team did well enough in the early stages to become the most-searched topic on Google Ireland this year. Photograph: Alan Betson/The Irish Times

The Rugby World Cup was the top search item on Irish Google last year. Ireland’s rugby campaign was cut short by a comprehensive defeat to Argentina in the quarter-final, but the early successes did enough to ensure that it would be the most-searched item.

Karen Buckley, the Cork student who was murdered in Glasgow in April, was the second most-searched item last year.

The third most-searched was Conor McGregor, the Ultimate Fighting Championship (UFC) featherweight champion. The Google analysis was conducted late last week, before McGregor sensationally knocked out José Aldo after just 13 seconds of the first round in his latest fight. Unsurprisingly, McGregor is the most searched sportsperson on Irish Google.

The runner-up was the former All Black player Jonah Lomu, who died this year. The third most searched for sportsperson is Ronda Rousey, the superstar of women’s UFC.

The fourth most-searched item on Irish Google was Paris following the Charlie Hebdo massacres in January and the terrorist attacks in November.

The fifth most-searched item was a man who will be a mystery to many. Lamar Odom is a 36-year-old US basketball star, best known as the husband of Khloe Kardashian, who collapsed following a drinking binge in Las Vegas in October and is having trouble with his memory.

Lady Colin Campbell is the sixth most popular search on Irish Google. The aristocratic author made quite an impression when she took part in I’m a Celebrity . . . Get Me Out of Here on ITV television earlier this month. The rest of the top 10 is made up of Jurassic World, Eurovision 2015, Charlie Hebdo and RTÉ’s Operation Transformation.

Former taoiseach Charles Haughey tops the list of politicians searched for, no doubt helped by the RTÉ mini-series documenting his life which was broadcast in the summer.

Minister for Health Leo Varadkar, who became the first Cabinet Minister to state he was gay, was second on the list, followed by controversial US presidential candidate Donald Trump.

British politicians Ed Miliband, David Cameron and the late Charles Kennedy also feature as does Renua Ireland’s Terence Flanagan, whose mental blank on radio was one of the most memorable political highlights of the year.