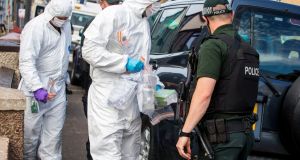 A 30-year-old British soldier has been arrested in Somerset, England in connection with dissident republican arms finds in Larne, Co Antrim, police have confirmed.

The Royal Marine soldier was arrested yesterday by members of the London Metropolitan Police Counter Terrorism Command in what was described as a “pre-planned intelligence-led operation”.

Following the arrest, related searches took place at a house and wooded area in both south Devon in England and Larne, involving police and forensic experts backed up by British army bomb squad members.

The soldier, who is believed to be from Northern Ireland, was detained on suspicion of preparation for acts of terrorism.

The arrest and searches relate to previous dissident republican arms finds in the Larne area. The first was last March at Carnfunnock Park and the second was in May at Capanagh Forest.

Because Larne is a predominantly unionist and loyalist area, it was initially suspected that the arms belonged to the Ulster Defence Association, the Ulster Volunteer Force or the Red Hand Commando.

After the weapons were carefully examined, however, it was concluded that they were part of a dissident republican cache.

While the threat posed by dissident republicans in Northern Ireland has been classified as severe for a number of years, the UK intelligence services raised the threat level in Britain last May from moderate to substantial. Security forces say the dissidents are small in both number and capacity, compared with the republican paramilitary organisations of the Troubles.

However, they have regularly warned that dissidents retain the ability to launch serious attacks on the security forces.

Scotland Yard said the arrest in Somerset was carried out by officers from the Metropolitan Police Service’s Counter Terrorism Command, supported by Avon and Somerset and Devon and Cornwall police. A ministry of defence spokesman in London said: “We are aware of a police investigation involving the arrest of a member of the armed forces under the 2000 Terrorism Act and will assist this investigation fully.

“It would be inappropriate to comment further on an ongoing investigation.”