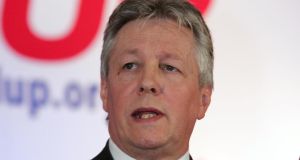 Northern Ireland’s First Minister Peter Robinson has moved to try to dampen an escalating controversy caused by his decision to defend a Belfast Protestant evangelical minister who said he did not trust Muslims and described Islam as “heathen” and “satanic” and “spawned in hell”.

In a statement today Mr Robinson repeated that he “strongly” believed Pastor James McConnell “has the right to freedom of speech” but that he “would never seek to cause any insult to any section of our community”.

The DUP leader said he valued the contribution of Muslims to Northern Ireland.

He added that he would meet local Muslim leaders to “demonstrate my ongoing support for them as integral law-abiding citizens in Northern Ireland”.

In an interview published in yesterday’s Irish News Mr Robinson said he would not trust Muslims involved in violence or who fully subscribed to Sharia law.

However he would “trust them to go to the shops” for him, he added.

In today’s statement, issued after a torrent of criticism against the First Minister, Mr Robinson said his remarks had been “given a meaning that was never intended”.

“For the avoidance of any doubt I make it clear that I welcome the contribution made by all communities in Northern Ireland, and in the particular circumstances, the Muslim community,” he said.

“No part of me would want to insult or cause distress to local Muslims. I can assure members of the Islamic community I respect their contribution to our society. I believe in building a peaceful and prosperous Northern Ireland and have always endeavoured to work for the betterment of all the people of Northern Ireland,” he added.

He also defended Pastor McConnell whose sermon at his Whitewell Metropolitan Tabernacle Church on the Shore Road in north Belfast earlier this month sparked this row.

Mr Robinson said, “I strongly believe that Pastor James McConnell has the right to freedom of speech. I will defend his right just as I defend the right of others to express views with which I disagree. People have the right to express their differing views and indeed the essence of democracy is the ability to do so in a way that is free from fear and intimidation.”

On BBC Radio Ulster’s Nolan Show this morning, and before his statement, Alliance Assembly member Anna Lo said she was so outraged by Mr Robinson’s defence that she was considering leaving Northern Ireland where she has lived for 40 years.

She referred to a spate of racist attacks in recent months in the North, particularly in Belfast, and said she feared the comments could “escalate even more of the racist tensions” in Northern Ireland.

“I do not feel safe here and I know a lot of ethnic minority people will feel very nervous,” she added.

A Northern Ireland businessman also went on the programme to say that when he was yesterday bringing an Indian Muslim businesswoman to Belfast with a view to her investing in the North and creating jobs that she became aware of the controversy.

He said she asked him turn the car around and return to Dublin. He said he persuaded her to come to Belfast but that because of the issue she felt fearful in the city.

The British MP George Galloway also said if Mr Robinson had made his remarks anywhere in Britain he would have been forced to resign.

This prompted Mr Robinson to tweet in response, “I won’t take lectures from a self-confessed leader of a bloody terrorist organisation on equality, tolerance and mutual respect for all”.

The PSNI already is investigating a possible “hate crime” after Pastor McConnell delivered his original sermon, which he is standing by. Earlier this month he said a “new evil had arisen” and that “there are cells of Muslims right throughout Britain” similar to IRA cells of the past. He said some people had characterised Islam as “little more than a variation of Christianity and Judaism” but this was wrong.

“Islam’s ideas about God, about humanity, about salvation are vastly different from the teaching of the holy scripture. Islam is heathen, Islam is satanic, Islam is a doctrine spawned in hell,” he added.

Pastor McConnell, who has a large Protestant evangelical following, complained of Muslim persecution of Christians and said that there was “powerful evidence that more and more of Muslims are putting the Koran’s hatred of Christians and Jews alike into practice”.

“Now people say there are good Muslims in Britain - that may be so - but I don’t trust them,” he said.

Pastor McConnell also referred to British Conservative Enoch Powell’s 1968 so-called rivers of blood speech warning against immigration into Britain: “Enoch Powell was right and he lost his career because of it. Enoch Powell was a prophet and he told us that blood would flow in the streets and it has happened.”