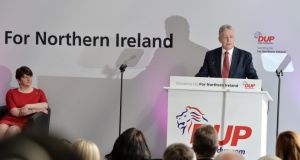 DUP leader Peter Robinson has called on Northern voters in the Westminster general election to grasp a “once in a lifetime opportunity to put Northern Ireland at the centre of British politics”.

First Minister Mr Robinson in launching his party election manifesto in Antrim on Tuesday said the DUP could play a “pivotal” role in the next British parliament in the event of a hung parliament.

Mr Robinson also deflected any suggestion that should DUP candidate Gavin Robinson fail to unseat outgoing Alliance MP Naomi Long in East Belfast that it could have implications for his leadership. Ms Long took the seat from Mr Robinson in the 2010 general election.

Mr Robinson said journalists had been “prophesying my doom for many, many years”. He added that it mattered “not a jot who is the leader of the Democratic Unionist Party” and that “whoever is leader will be taking forward” the DUP agenda into the British parliament.

If reporters wanted to know what were the chances of Gavin Robinson winning East Belfast he said they should “look at the broad smile on Gavin’s face”.

The DUP leader said he wanted to use the election to implement as much as possible of his party’s five point plan: to help make “Northern Ireland an economic powerhouse”; to deliver world class public services; to create a fair society; make politics and government work better; and “strengthen the United Kingdom and protect and enhance our British identity”.

Mr Robinson speaking at the Wrightbus factory in Antrim with a new gleaming London bus as backdrop, said that at the heart of the DUP manifesto was the economy. The overall DUP plan had 100 “action points”. He knew that whoever was in government would not implement all of them but that if DUP support was required that “we will require substantial progress against each of the five points in our plan”.

“We are not seeking places in Cabinet nor do we want posts for ourselves. We are running in this election to get the best deal for Northern Ireland and the UK as a whole,” he added.

Mr Robinson said he had a “simple message” for voters: “Let’s grasp this once in a lifetime opportunity to put Northern Ireland at the centre of British politics”.

Following that theme DUP deputy leader Nigel Dodds said that in the event of a hung parliament there was “an opportunity for Northern Ireland’s voice to be heard in London like never before”.

On welfare reform, the issue which has caused a political logjam in the Northern Executive, Mr Dodds said, “We believe that the best mechanism to reduce welfare spending is economic growth - getting those who can work, into work.

“We will assess any welfare proposal on the following three tests. Will it incentivise work? What protection does it provide for those most in need? What impact will it have upon the costs of administration? Proposals such as taxing disability benefits would fail such tests.”

Mr Dodds said the DUP wanted to see the British deficit of more than £1.5 trillion eliminated. “However, we also recognise that a rush to reduce and eliminate the deficit could have an impact on growth,” he said.

He warned that “after five years of sustained and deep cuts” that any further significant reductions to front-line services would be harmful.

Mr Dodds said the DUP wanted a renegotiation “of the UK’s role in Europe and an early referendum on the European Union”.

He also called for “protection in law for the official display of the union flag and the symbols of our nation” and “legislation for a new way forward on parading which respects the fundamental rights of assembly”.

“ Increases in health and education spending.

“ Early “in out” referendum on European Union.

“ Welfare Reform to incentivise work and to protect those most in need;

“ An official opposition in Northern Assembly.