Aloysio Falcão: Police did not authorise filming but were not in position to prevent it 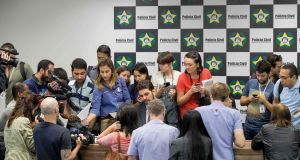 A senior Brazilian police officer has said he regrets the arrest of the president of the Olympic Council of Ireland (OCI), Pat Hickey, was filmed by the media, but said it was not the fault of the police.

Local media went to the hotel and entered it, and the hotel security did not stop them, he said.

Commissioner Aloysio Falcão said that at the request of Mr Hickey, the police took him from the hotel via the basement so the media waiting outside did not get to film him being taken away. “Nobody saw him being taken to the jail.”

He said the police did not authorise the filming of the arrest but were not in a position to prevent it.

He pointed out that Mr Hickey (71) was allowed go to hospital and was not taken to jail until a doctor had authorised it. “The police treated him very well,” he said.

The senior police officer, involved in investigating suspected ticket touting in relation to tickets for the Rio Olympics, told Joe Duffy on RTÉ radio that Mr Hickey was arrested because a judge had issued a warrant, and that the media had learned of this.

He said it was not unusual for police in Rio to display documents they had seized and to allow the media to film them. Mr Hickey’s passport and other documents were shown to the media after he was arrested.

He said Mr Hickey had subsequently handed over a second valid passport, also Irish, to the police. He said he thought Mr Hickey had a second passport because he travelled a lot.

Mr Falcão said Mr Hickey may have to remain in detention for up to three months before a decision on his release could be made by the courts.

He said there is a capacity for people being detained to remain in a “domiciliary prison” if they are more than 80 years old or have health issues, but that a decision in relation to this was a matter for a judge.

Mr Hickey’s lawyers were trying to arrange that Mr Hickey be moved to such a facility, he said, and he had no objection.

He said it was normal under Brazilian law to detain people in jail so as to prevent them from leaving the country. Mr Hickey “has to stay in Brazil” as the police continued its inquiries.

The commissioner also said the Brazilian police had been in contact with Interpol as part of their investigations, but would not say what information they were trying to secure via the international police co-operation body, or whether they were trying to contact the Irish police.

He said the Brazilian police had been investigating the international ticket agency, THG, since the 2014 World Cup, but had not become interested in the OCI until a “sting operation” in Rio where 1,050 tickets for the Games were seized, all of which were tickets that had been allocated to the OCI. A THG director was arrested in 2014, the commissioner said.

THG was denied a licence to sell tickets for the Rio games and OCI, which had used THG in the past, switched to an Irish ageny called Pro10 Sports Management.

The commissioner said the Brazilian police would like to swap information with the Irish Government about “this scandal”.

The police had not yet contacted the Irish embassy in Brazil. “I know that [Minister for Sport] Shane Ross had a meeting with Pat Hickey, but he has left.” He said he would also like to have contact with the Irish police.