Richard III: ‘virtual’ skeleton of monarch to be shown in Galway

Exhibition, including three-dimensional image of remains, set to run for three days

The ‘Richard III Discovered’ Exhibition has arrived from the University of Leicester and is hosted by NUI Galway as part of the 20th Galway Science and Technology Festival. Video: Joe O'Shaughnessy

A team of scientists, historians, archaeologists and engineers from the University of Leicester describe how they determined that a skeleton found under a car park in Leicester in 2012 was that of King Richard III. Video: The Royal Society 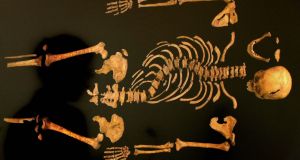 The remains of Richard III. The last Plantagenet monarch.

When English monarch Richard III was dying of his battle wounds, he never anticipated that he would become “the scientific story of a decade”.

More than five centuries after his fall at the Battle of Bosworth, his “virtual” skeleton is due to cross the Irish Sea for the first time for an exhibition opening in Galway later this week.

A suit of medieval armour and an arrow drop demonstrating the various wounds which the last Plantagenet king sustained also form part of the University of Leicester exhibit hosted by the 20th annual Galway Science and Technology Festival.

The University of Leicester’s genetics department is known as a “birthplace” of DNA fingerprinting, discovered by Sir Alec Jeffreys in 1984.

The 32-year-old monarch, who had scoliosis, was controversial in life and afterwards in death, providing Shakespeare with material for one of his odious villains.

Richard III lost his son and his wife, came to the throne after the death of his brother, Edward IV, and his two-year reign was marked by unproven accusations that he had his two nephews killed to ensure his own claim.

Contemporary records said his body had been buried “without pompe or solemne funeral” in Greyfriars monastery, but there was no trace of a grave.

His skeleton was found in a burial place so small that his head was propped up against it. Scientists confirmed the skull had sustained a number of wounds, one four inches through the base.

The skeleton was found to have a “characteristically curved spine”.

Carbon-dating confirmed a timeframe suggested by studies of the bones, while living descendants of his family donated DNA samples to assist genetic analysis.

The Richard III Discovered exhibition, including a three-dimensional image of the skeleton, will run for three days, opening with a talk by Matthew Morris at the O’Donoghue centre at NUI Galway (NUIG) for secondary school groups next Friday.

The exhibition will move to the Galway Shopping Centre next Saturday, where it will be open to the public 10am-4pm. It will return to the NUIG O’Donoghue centre on the Sunday as part of the science and technology festival highlight on the campus.

The exhibit and talks supported by the British Council of Ireland are free of charge, but numbers are limited.

Booking details are on galwayscience.ie