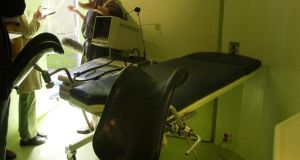 Three officials from the Department of Health briefed the Assembly health committee today about the current state of the move to revise the guidelines on when abortion could take place in Northern Ireland. File photograph: Frank Miller/The Irish Times

Revised guidelines on abortion in Northern Ireland which will address the issue of foetal abnormality will be published as soon as possible and certainly before the end of this year, officials have told Northern Assembly’s health committee.

Department of Health officials also told the committee this afternoon that the advice of the North’s Director of Public Prosecutions Barra McGrory would be taken into account when the guidelines are completed.

Mr McGrory last week addressed the so-called “grey area” referred to by Minister for Health Edwin Poots of whether it was a criminal offence to assist a woman travelling from Northern Ireland to Britain for an abortion. The DPP said it would not be a crime to assist a woman obtaining an abortion that was legal in Britain.

The abortion issue came to public prominence again two weeks ago after two women, one carrying twins, disclosed that their babies had anencephaly and that under Northern Ireland law they could not have abortions in the North. They appealed to the Minister for Health to change the law in such cases of fatal foetal abnormality.

With anencephaly there is an absence of a major part of the brain, skull and scalp in the foetus. Babies are stillborn or usually die within a few hours or days.

Three officials from the Department of Health briefed the Assembly health committee today about the current state of the move to revise the guidelines on when abortion could take place in Northern Ireland.

The 1967 British abortion Act does not apply in Northern Ireland. Abortions in the North are permitted where it is “necessary to preserve the life of the woman or there is a risk of real and serious adverse effect on her physical or mental health, which is either long-term or permanent”. About 40 legal abortions take place annually in Northern Ireland.

The department’s director of family and children’s policy Eilis McDaniel explained that a recent consultation which elicited 86 responses was not about changing the law on the issue, but about revising and bringing greater clarity to the guidelines on abortion. “The guidelines must reflect the law,” she told committee members.

She said the advice last week from Mr McGrory on the “grey area” was “helpful” and would be taken into account when the guidelines were completed. This would happen by the end of the year at the latest.

“He has made a public contribution; he has done that with the Minister on a face-to-face basis. We need to take account of what he has said in how the final document is formed on that particular point,” said Ms McDaniel.