Homeowners given until Friday after ‘unprecedented’ volume of phone calls 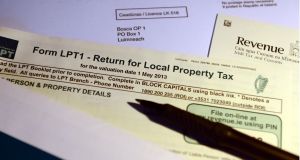 The deadline for filing an online return for the property tax has been extended to 5pm on Friday, November 29th. Photograph: Bryan O’Brien/The Irish Times

Property owners now have until Friday to file their property tax return for next year after the Revenue Commissioners extended the deadline due to an “unprecedented” rush to pay.

Today had been the official deadline for filing a return online.

In a statement, Revenue said that due to the “exceptional level of filing” over the last two days and unprecedented volume of calls to the local property tax helpline, it would give people until 5pm this Friday, November 29th, to file.

The deadline was also extended last May, after the first local property tax returns fell due.

Revenue said the extension of the deadline would allow it time to implement the individual’s preferred LPT payment option for 2014.

Over 250,000 returns have been filed since Monday alone, with 70,000 calls handled by the helpline since then.

“Again, as in May last, any taxpayer that has submitted a genuine query - whether by email, letter or voicemail to the helpline - in respect of their 2014 obligations in advance of the filing date will be treated as having complied with their requirements on time,” Revenue said.

“ For this treatment to apply however, they must file their return promptly when the query is resolved.”

Taxpayers who had paid by single payment methods or by direct debit last year are required to file their returns for 2014 by today and also to specify their payment method.

About 700,000 of the 960,000 households contacted by letter last month had filed their returns as of Tuesday night.

However, many who had queries or who were unsure about aspects of the application had difficulties getting through to the Revenue helpline.

The introduction of Local Property Tax is the largest extension of the self-assessment system in the history of the State. It has presented an administrative challenge to the Revenue and has also attracted criticism after it emerged that those paying by credit or debit card would effectively have to pay both the 2013 and 2014 taxes in one calendar year.