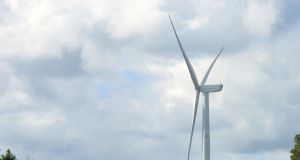 Oweninny Power Group says its turbines will be over 1km from the nearest dwellings, while Coillte says it has a buffer-zone of 700m, with one house within 537m of one turbine by agreement with the landowner


Plans by three semi-State companies to invest €825 million in two wind-farm projects in north Mayo could make a significant contribution to Ireland’s renewable energy targets, an oral hearing has been told.

If approved, the two projects would constitute the largest and highest onshore wind farm in the State, with 160 turbines spanning 75sq km of bogland east of the Corrib gas project, potentially generating 521 megawatts.

Residents in the area, from Bellacorick to Crossmolina, are seeking a return to the community of some €10,000 per megawatt generated.

Strategic infrastructure approval is being sought by an ESB/Bord na Móna consortium, Oweninny Power Ltd, for 112 turbines at Bellacorick in a €600 million investment, while Coillte is seeking approval for 48 turbines in an estimated €225 million investment on adjoining lands at Cluddaun.

Oweninny Power Group says its turbines will be over 1km from the nearest dwellings, while Coillte says it has a buffer-zone of 700m, with one house within 537m of one turbine by agreement with the landowner.

Both applicants say they consulted extensively, before seeking 15-year permissions with a 30-year operational life from completion.

The ESB/Bord na Móna consortium has held permission, since 2003, for a 180-turbine farm at Bellacorick, where the State’s first commercial wind farm, with 53m-high turbines, was built by Bord na Móna in 1992. The €600 million application involves fewer higher turbines than in the 2003 plan.


Conservation
Some five special areas of conservation (SAC) are involved, and provision has been made to protect sensitive species including the marsh saxifrage and hen harrier, Dr Paddy Kavanagh of ESB International said at the hearing.

The hearing continues today for the Oweninny Power Ltd application and Coillte’s application will be considered from April 29th.