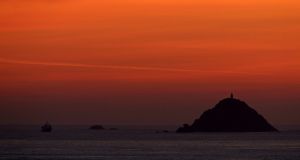 The sun sets behind Irish Lights vessel Granuaile, anchored off Black Rock in Co Mayo, where dive teams are searching the wreckage of Irish Coast Guard helicopter Rescue 116: the tragedy has brought back painful memories of other losses at sea. Photograph: Chris Radburn/PA Wire

Silhouettes of Achill Head, Croaghaun and Slievemore against a blue sky and flat, calm sea off Blacksod on Friday belied the treacherous nature of the north Mayo coastline on which the crew of Rescue 116 lost their lives.

The indented Atlantic seaboard from Achillbeg to Erris Head is known for its strong north-south tides, currents, eddies and swells around a series of islands, rocks, reefs and the imposing Stags of Broadhaven.

The search, rescue and recovery effort in Blacksod has brought back painful memories of recent losses. On September 11th, 2015, 23-year-old Carrowteigue fisherman Daniel Doherty was reported missing after he had gone out to check pots on the Tara Rose. His boat was found that night and his body was recovered a fortnight later in Lacken Bay, 32km east of his craft’s location.

On July 27th, 2001, Belmullet publican Tony Lavelle lost his 14-year-old son Anthony during a boat trip from Frenchport to the Inishkea islands with 50 ewes on board. The animals shifted, the boat capsized, and Mr Lavelle was secured on to a piece of timber by his son which kept him afloat.

Mr Lavelle was rescued by a local boat and winched aboard an Air Corps search and rescue helicopter. However, his son, who could swim, was swept away by currents and his body was never found.

The nature of the Blacksod Bay search is personally challenging for many of the rescue agency staff and volunteers who knew and trained with the highly experienced team of Capt Dara Fitzpatrick, Capt Mark Duffy, Paul Ormsby and Ciarán Smith.

It came just several days after the funeral of Irish Coast Guard airman Daithí Ó Cearbhalláin, who won several awards during his time with the Air Corps and died after a short illness. And it is just six months since Irish Coast Guard Doolin unit member Caitríona Lucas died when a rib capsized during a search for a missing man off the Clare coast. Her husband Bernard has travelled to north Mayo to help with the shore search for the helicopter crew.

An RNLI memorial at its headquarters in Poole, England, includes the names of 66 Irish lifeboat crew from 17 stations who never returned home, from 1821 to 1977.

The State’s marine gallantry awards are named after Michael Heffernan, a diver who died while carrying out a cave rescue in north Mayo in October 1997, and many of those involved in that effort are participating in or supporting this search.

Mr Heffernan’s death highlighted the risks taken by those who give up their time to help in rescues. Similarly, New Ross diver Billy O’Connor (51) lost his life in early December 2005 while attempting a search for Pat Colfer, the skipper of the Rising Sun fishing vessel which sank off Co Wexford’s Saltee Islands.