Reflecting the Rising: high spirits on both sides of river 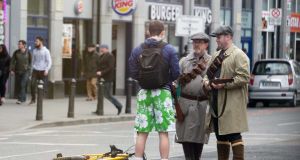 On Parnell Street during RTÉ’s Reflecting the Rising in partnership with Ireland 2016: a free family event in Dublin with an enormous variety of activites. Photograph: Gareth Chaney Collins

“God save Ireland! ” bellows the man outside Eason’s. He’s handing out pamphlets with a potted history of the Rising and an exhortation to repent our sins. It’s 10.30am and O’Connell Street is already starting to fill up. Clumps of volunteers (as opposed to Volunteers) in period dress are standing around drinking coffee. The food stalls in the central meridian are up and running. Our gallant allies in Europe are represented by a bratwurst grill. Oblivious of the differences carefully fostered by an alien government, Northern Ireland’s largest range of gourmet, vegetarian, vegan, exotic and gluten-free burgers are being sold within audible range of the spot where the Proclamation was first proclaimed.

RTÉ’s central role in all these Reflecting the Rising events means the broadcaster has sent all its recognisable faces out into the field. Down at Smithfield Square, Aonghus McAnally is standing on top of an antique tram, gamely banging out The Wild Rover to a bewildered but amiable group of tourists. Fifty years ago, Aonghus’s father, Ray, was the lynchpin of RTÉ’s flagship series Insurrection. I think Aonghus got the tougher gig. “Hey, it’s Conor McGregor,” he shouts at a young man with a carefully tended beard, obviously not realising everyone in Smithfield at this time of day looks like Conor McGregor.

In the foyer of the Abbey Theatre, a plaque is being unveiled to the seven members of the Abbey company who took part in the Rising. In the theatre itself, Fearghal McGarry of Queen’s University explores the tensions between radicalism and conservatism among the Abbey rebels.

I don’t think I’ve ever seen quite so many people in St Stephen’s Green. Keeping off the grass doesn’t seem an option. Crowds shuffle along as a gypsy band is keeping things lively around the bandstand and Fergal McCarthy’s Cartoon History of the Rising is drawing big crowds (go see it in the Little Museum of Dublin). A small minority wear Easter lilies, but an impressive number have managed some approximation of period costume, making themselves popular targets for tourists in search of selfies.

Merrion Square is just as crowded, but with a more child-friendly demographic, and the eastern side of the square is full of stalls offering more burgers and bratwurst. Easter 2016 and the smell of charcoal-grilled meat will always be associated in my mind. Walking back through Trinity, I duck into the Exam Hall, where Irish Times columnist Noel Whelan is comparing the different imagery used in the 1966 and 2016 commemorations. 1966 was “less complex, more powerful,” he says. Which sounds about right to me.