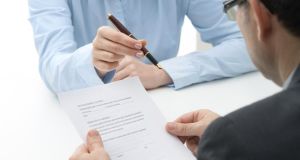 Staff on low incomes who cannot benefit fully from the pension levy changes will receive special salary increases to bring them up to the €1,000 level. Photograph: Getty Images

The new public service pay restoration deal, which will see most public service staff receive €2,000 on a phased basis, will cost the State €566 million over three years.

However, Minister for Public Expenditure and Reform Brendan Howlin last night said it was “affordable” and the “right thing to do”.

The deal was reached by Government representatives and public service trade unions after nearly three weeks of talks.

The Government confirmed there had been last minute changes to original pay-proposals on Thursday night. A Government spokesman said Mr Howlin had consulted Taoiseach Enda Kenny regarding progress in the talks process.

“They agreed to submit new proposals to the trade unions on Friday to make the overall deal more affordable for the taxpayer by limiting the benefits for higher earners and excluding Ministers from any pay increases.”

It is understood that as part of these revisions, original proposals to provide a €1,000 boost to those earning more than €65,000 in the public service in 2017 were shelved.

Such staff were already scheduled to benefit from pay restoration under the earlier Haddington Road accord.

Under the proposals all public service staff will receive a €1,000 flat-rate boost to earnings next year to be achieved by raising the exemption thresholds for the public service pension levy.

Staff on low incomes who cannot benefit fully from the pension levy changes will receive special salary increases to bring them up to the €1,000 level.

Mr Howlin said last night, “I think what we want is a quality public service. That means one that we pay at a reasonable rate. Nobody in the public service has had a pay rise. Everybody has had a pay cut. We now want to map out a path for pay recovery.”

A spokesman for the public service committee of the Irish Congress of Trade Unions said the proposed deal “achieved the objective of fairness”.