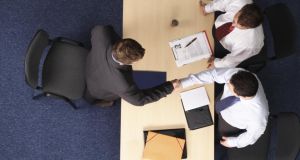 Potential deal would likely boost earnings on average by between €800 and €1,000 per year. Photograph: Getty Images

Talks were continuing on Tuesday night between Government representatives and trade unions on a draft agreement which public service staff would have to accept in return for pay restoration.

The talks which have been under way for a fortnight dealt largely with remaining non-pay issues although informed sources said discussions on scoping out pay parameters were taking place last night in the Department of Public Expenditure and Reform.

The Irish Times reported earlier this month that the Government was expected to allocate between €250 million and €300 million for public service pay restoration.

This would involve a boost to earnings on average by between €800 and €1,000 per year. This increase in earnings is expected to be achieved by changing the application of the public service pension levy.

It is understood that key elements of the talks dealt with proposed requirements for trade unions to co-operate with the Government’s ongoing reform agenda.

One late draft of the text of the document suggested that the Government could seek in the education sector support for curriculum reform in schools and with its strategy for further education and training.

It is understood that the draft proposals caused concern for some teaching unions, particularly if they were to be linked in any way to binding arbitration.

The Teachers’ Union of Ireland (TUI) is already engaged in industrial action over reform of the Institute of Technology sector. Branches in Waterford, Cork, Tralee and Dublin institutes have voted to oppose “forced mergers” under a plan in higher education to create technological universities.

Reforms in the further education and training sector are also highly contentious. A five -year strategy published last year proposes that more courses be provided on a year-round basis rather than following the academic calendar. TUI members are also concerned about what they see as a shift towards outsourcing and privatisation in the sector.

In addition, there is strong opposition within both the TUI and the ASTI to any linking of the pay talks to the junior cycle reforms. Both unions are set to ballot on the latest compromise plan in September, pending clarification from the Department of Education and Skills on how it will be resourced.

In the local authority sector the draft text suggested that backing would be required for the Irish Water programme and the action programme for effective local government.

In the health area staff co-operation,according to the draft text, would be needed for structural reforms including the establishment of hospital groups while in the justice sector support would be sought for the review of An Garda Síochána.

The draft document drawn up as part of the current talks also stipulated that the parties would reaffirm that strikes would be banned as a means of dealing with matters set out in the proposed agreement.

The parties would also have to agree under the draft text that there would be no cost-increasing claims for improvements in pay or conditions of employment submitted for the period of the deal.

Parties would also have to commit to promoting industrial relations harmony.

Trade unions and employers would, under the draft text, also have to reaffirm commitments made under the previous Croke Park and Haddington Road agreements to binding arbitration.

Parties would also have to co-operate with the implementation of change pending the outcome of the industrial relations process which would be conducted in a timely fashion.

The Government is understood to have been anxious to secure a reaffirmation to industrial peace in any new deal as it believed that there had been “some slippage” in this regard over recent times.