PSNI appeal to find the shooter of two endangered falcons

The peregrines, a protected species, were found dead near Lurgan, Co Armagh 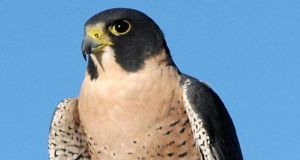 Constable Glen Mackin appealed for public assistance in tracing who shot the birds and pointed out that peregrine falcons are a protected species under the Wildlife (NI) Order.

The Royal Society for the Protection of Birds (RSPB) has deplored the shooting dead of two peregrine falcons in Co Armagh and expressed general concern about threats to birds prey in Northern Ireland.

The PSNI is investigating the killings after the two peregrines were discovered in the Waringstown area near Lurgan.

Constable Glen Mackin appealed for public assistance in tracing who shot the birds and pointed out that peregrine falcons are a protected species under the Wildlife (NI) Order.

The birds were discovered by a member of the public in mid-May and sent away for post mortem examination.

The results were disclosed by the police this week.

The RSPB has condemned the shootings and warned that “in some cases birds of prey are deliberately targeted as some people incorrectly see them as a threat to livestock or game birds”.

A spokeswoman said that last September a peregrine falcon was found dead of suspected poisoning in the grounds of St Columb’s Cathedral in Derry and that this latest case in Waringstown was also “deeply concerning”.

She said there was also concern that attacks on birds of prey would jeopardise the attempts to reintroduce the red kite.

“Back in 2008 RSPB NI joined forces with the Welsh Kite Trust and the Golden Eagle Trust to reintroduce the species to Northern Ireland’s skies,” explained the spokeswoman.

“The current population is thought to stand at around 14 breeding pairs but it’s thought the population will only reach a sustainable level once around 50 pairs are established,” she added.

“The small population of red kites is under real pressure after a number of deaths through poisoning and shooting, the most recent of which was in May this year when a female bird was discovered near Katesbridge (Co Down) with gunshot wounds.”

The spokeswoman said the birds of prey were also vulnerable to poisoned bait left out with the intention of controlling foxes and crows.

She said this was illegal practice “as it is indiscriminate and can affect not only scavenging birds like red kites, but also pets, livestock and humans”.

She said that last year there were 21 reports of killings of birds of prey made to the RSPB in Northern Ireland.

The spokeswoman added that more detailed figures for 2013 show that 11 birds of prey were poisoned that year, one of which was a white-tailed eagle found dead in Co Antrim.

Five buzzards and five red kits were found poisoned in counties Derry, Down and Antrim.