Health Minister insists no evidence to suggest it could damage health 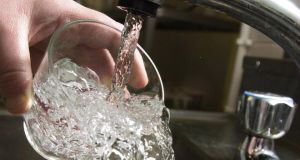 The Minister said many countries had water fluoridation schemes

A proposal by Sinn Féin’s Brian Stanley to discontinue water fluoridation on health grounds was rejected in the Dáil yesterday.

“The need for fluoridation, if there ever was a need, has been entirely negated by modern use of fluoride toothpaste, which ensures a more than adequate supply of fluoride for the purpose of improving dental health,’’ he said.

Mr Stanley, moving the Health (Fluoridation of Water Supplies) (Repeal) Bill 2013, said the World Health Organisation had stated in 2006 that “excessive exposure to fluoride in drinking water can give rise to a number of adverse effects’’.

Fluorosis
Those, he added, could range from mild dental fluorosis to crippling skeletal fluorosis as the exposure continued.

Exposure to fluoride had also been linked to the risk of developing Alzheimer’s disease and osteoarthritis.

He said fluoridation was introduced at a time when tooth decay was a significant health issue, representing a cheap way to deal with a widespread problem, especially among poor and marginalised people.

“The Department of Health has never conducted any research on the health effects on the population of mass fluoridation in the intervening period, despite the fact that it was stipulated in the 1960s legislation,’’ Mr Stanley added.

Minister of State for Health Alex White rejected the claim that there were health questions surrounding fluoridation and that the weight of scientific evidence was against it.

“Nothing could be further from the truth,’’ he said.

Oral health protected
Mr White said the balance of scientific evidence worldwide confirmed that fluoridation, at the optimal level, did not cause ill-effects and protected the oral health of the population.

Mr White said many countries had water fluoridation schemes, including the United States, Canada, United Kingdom, Spain, Australia and New Zealand. Data from last year from the US showed more than 185 million people, 60 per cent of the population, had fluoridated water.