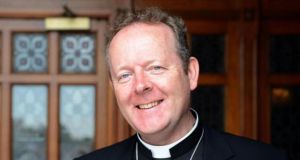 Pro-gay faith groups have described as “important” a meeting held with Archbishop Eamon Martin, the Catholic Archbishop of Armagh and Primate of All Ireland. Photograph: Eric Luke/The Irish Times.

Pro-gay faith groups have described as “important” a meeting held with Archbishop Eamon Martin, the Catholic Archbishop of Armagh and Primate of All Ireland.

Following the 90 minute meeting members of the groups said the Archbishop had undertaken to review a number of issues surrounding the treatment of gays by the church.

The meeting was requested by the umbrella group Faith in Marriage Equality during the recent referendum campaign on same sex marriage.

Members of Gay Catholic Voice Ireland and We Are Church Ireland had been offended by some of the literature which was made available in their churches during the referendum campaign, the Archbishop was told.

Dr Richard O’Leary of Faith in Marriage Equality said the unprecedented meeting between pro-gay Christians and the Catholic primate took place at Archbishop’s House in Armagh.

He said he had impressed on the Archbishop that the absence of affirmation of gay persons by the Churches contributes to the raised rate of suicide. He said the meeting was a positive step in opening dialogue “as a contribution to the reality check”signalled by it after the vote for civil marriage equality.

“We were positively received by Archbishop Martin who said he was committed to continuing dialogue and that he was particularly concerned about the pastoral care of gay persons,” said Dr O’Leary.

During the meeting Jim O’Crowley, a gay Catholic, also shared with Archbishop Martin the experiences and views of gay Catholics and their families.

The Archbishop said he had a copy of To have and to Hold”: stories and reflections of LGBT people their families and friends edited by Patricia Devlin and Brian Glennon, and had found this helpful to read.

Brendan Butler, of We are Church Ireland Ireland, said he drew attention to paragraph three of the Letter to the Bishops of the Catholic Church on the pastoral care of homosexual persons, which he said was “morally offensive” as it describes homosexual orientation as an objective disorder and ordered towards an intrinsic moral evil.

The pro-gay, faith delegation asked Archbishop Martin to consider this issue during his discussions at the Synod of Bishops in Rome in October, when he will represent the Irish Catholic bishops.

“Archbishops Martin said that he was open to receiving additional material from We Are Church Ireland on this subject” said Mr Butler.

A spokesman for the Catholic bishops said there would be no official response to the meeting but pointed to a statement on the website of We are Church Ireland regarding it.