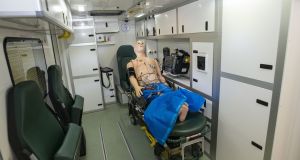 A priest has questioned the level of investment in the National Ambulance Service after a parishioner was left waiting for more than 45 minutes for an ambulance after he collapsed at Mass.

Canon Michael Murphy raised the issue on The Neil Prendeville Show on Cork’s Red FM after an elderly man collapsed during Sunday Mass at The Church of the Assumption in Ballyphehane in Cork.

The church is about 2km from the National Ambulance Service base at the Kinsale Road Roundabout, but the man was left waiting as an ambulance had to be diverted from Mallow some 36km away to respond to the emergency.

“Thankfully the man is doing okay, but perhaps there isn’t sufficient money being pumped into the ambulance service.

“It’s bizarre that they had to bring an ambulance from Mallow when there were eleven ambulances parked up at the Kinsale Road Roundabout depot,” he said.

“People in the parish are incensed . . . there’s all this talk of a recovery but I’m not sure there’s enough money being invested in the ambulance service.”

The National Ambulance Service confirmed that a 999/112 call was received at 10.46am on Sunday for the Ballyphehane area but emergency ambulances from Cork City, Midleton, Macroom, Clonakilty, Skibbereen and Bantry were all engaged on calls at the time.

According to a National Ambulance Service statement, the first available ambulance, which was based in the Mallow area, was dispatched at 10.51am and arrived at 11.34am. The patient was treated at the scene.

The incident is the second involving an ambulance delay in the Ballyphehane area in recent weeks and follows the case of Craig Linehan (14), who suffered a serious leg injury while playing soccer on February 20th and had to wait 75 minutes for an ambulance.

Fianna Fáil Cllr Tom O’Driscoll said that it was unacceptable that people in the State’s second city were being left without proper ambulance cover at weekends and he questioned whether the National Ambulance Service had enough staff on the roster at weekends.

“I just wonder is it a question of not having adequate staff for the weekend roster as they certainly seem to have enough ambulances,” he said.

“I find it puzzling an ambulance had to come from Mallow - you would have thought there would have been one closer to the city.

“It’s a logistics issue but it does seem remarkable that in the second city in the country somebody has to wait 45 minutes for an ambulance on a Sunday morning.”

Questioned by The Irish Times about staffing arrangements at weekends, the National Ambulance Service said that it was “not in a position to provide specific rostering arrangements as requested”.