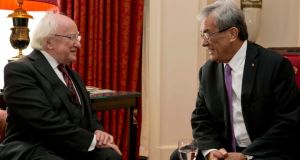 President Michael D Higgins arrived in Paris on Monday to attend the “Summit of Consciences for the Climate” organised by President François Hollande.

The purpose of the day-long conference is to raise consciousness of the threat posed by global warming, in the run-up to the COP 21 UN conference on climate change, which will be held in Paris next December.

Mr Higgins was accorded the honour of a one-to-one meeting with Mr Hollande at the Elysée Palace prior to the dinner for the main conference speakers.

Speakers at Tuesday’s conference are an eclectic and colourful mix ranging from an astro-physicist to the former governor of California Arnold Schwarzenegger. They include religious leaders from all the world’s main faiths.

Mr Hollande is eager to show that the UN Framework Convention on Climate Change (UNFCC) is about more than mathematical commitments to reducing greenhouse emissions; that there is a human, ethical, and philosophical dimension to the problem.

Mr Higgins will speak about “The Power of Ideas for Climate; Making a New Beginning.”

Other speakers include the former UN secretary general Kofi Annan, Prince Albert of Monaco and the former president of Ireland and UN special envoy for climate change Mary Robinson.

Mr Higgins is expected to stress linkage between fighting climate change and the UN Millennium Development Goals, the heavy weight of European responsibility, and the need for solidarity.

He decries what he sees as the selfishness of state-led policies and negotiations, and calls for a return to the post-World War II belief in multilateralism and the common interest.

The Irish president delivered addresses at the Sorbonne and Unesco during an official visit in 2013. He was guest of honour at the Festival Interceltique in Lorient last summer, and maintains close friendships with several French socialist politicians.