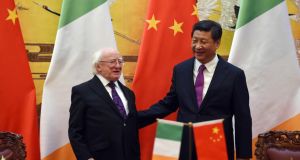 After a state welcome with full military honours at the Great Hall of the People, President Michael D Higgins said he had warm discussions with his Chinese counterpart Xi Jinping.

The President said that this new closeness would form the basis for the next stage in Sino-Irish relations.

Xi Jinping visited Ireland in 2012 when he was still vice-president. And the President said he had invited Mr Xi to make a return visit to Ireland, which the Chinese leader had accepted, although no date had been set.

“We had a very warm discussion across a very wide range of subjects,” he said, after a dinner with Chinese and Irish business leaders.

The atmosphere seemed positive, as Mr Xi smiled throughout during the meeting in the Great Hall of the People near Tiananmen Square, the vast concourse at the heart of Beijing.

Mr Higgins was greeted with full military honours and inspected the troops while a large contingent of children waved.

On the subject of human rights, Mr Higgins said they had been comprehensively discussed.

“There are indeed very important core human rights, but where this conversation began was in relation to the UN World Millennium Goals and the right to be free from hunger,” he said.

“Universality cannot be reduced back to a single source,” he said. “It has to take . . . into account different constitutions.”

Mr Higgins recalled Mr Xi’s visit to Ireland in 2012 and invited him to return at his “convenience”.

“We were very honoured by your visit . . . it was a wonderful visit,” he said earlier at a long table accompanied by Minister for Finance Michael Noonan and Minister for Foreign Affairs Charlie Flanagan.

Mr Xi, who is president of the People’s Republic of China, general secretary of the ruling Communist Party and head of the army, recalled with fondness his trip to Ireland.

“I am very glad since my visit in 2012 that bilateral relations between our two countries have gone to the next stage, in many areas, including trade and other areas of co-operation,” said Mr Xi.

“Next year marks 35 years since the establishment of bilateral relations between China and Ireland, and I hope this can be the starting point for taking relations and co-operation between the two countries to a new level.”