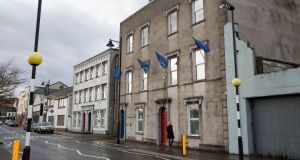 Former president Mary Robinson’s brother has yet to sign a deal to sell the family’s ancestral home in Ballina to house Ireland’s first presidential library. This is despite the fact that €6 million of State money has already been allocated to the project and a major campaign is under way in the US to raise millions from private donors.

The €8.35 million Mary Robinson Centre is due to be in Victoria House, a three-storey period property on the banks of the River Moy in Ballina, owned by Ms Robinson’s brother Adrian Bourke. It is currently a solicitor’s office.

Mayo County Council has allocated €1.5 million to buy the property and adjacent lands, but four years after the centre was first announced, the council and Mr Bourke have failed to agree a price.

Freedom of Information documents indicate that Mayo County Council was prepared to pay €665,000 for Victoria House. This was based on a valuation agreed by NUI Galway “for the acquisition of property of strategic value to the University”.

NUI Galway is the academic partner and an enthusiastic supporter of the project.

Mr Bourke did not respond to an emailed list of questions surrounding the sale.

Mayo County Council would only confirm that the sale has not been completed.

Minister of State Michael Ring said he had assumed the sale had gone through after the Department of Arts, Heritage, Regional, Rural and Gaeltacht Affairs announced an allocation of €2 million towards the project.

The money was given cabinet approval and announced by Taoiseach Enda Kenny in December last year.

Mr Ring said he will be seeking answers from Mayo County Council.

Cllr Michael Loftus, the chairman of Ballina Municipal District, said councillors have been “taken aback” by the protracted nature of the negotiations over the sale.

Cllr Loftus informed the other councillors in the district, one of four sub-districts of Mayo County Council, on Friday that the sale had not been concluded.

Cllr Loftus will raise the issue at the monthly meeting of Mayo County Council today.

“I want an answer from the Mayo county manager about it. I would like to see it [the centre] succeed but, if it is not financially viable, it shouldn’t go ahead.”

Ballina-based councillor Jarlath Munnelly said he too has questions about the viability of the centre. He accused the council of not being forthcoming with answers.

“I have asked for a report about how this centre is going to be funded. I have yet to receive that report,” he said. “I wonder if this has been thought through properly.”

The proposed centre was announced in 2012. Planning permission was received in 2015. The construction will go out to tender at the end of October.

However, earlier progress reports reveal that the sale of the property to Mayo County Council was supposed to have been concluded in the second quarter of 2015 with the centre being completed by the end of this year.

It is planned both as a visitor centre and a place to house former president Robinson’s archive which is being donated to Mayo County Council and was valued at €2.5 million in 2012. It consists of 522 boxes of material going back to 1969 and more than 500,000 pages.