Plain and simple: a hard border will be bad for business 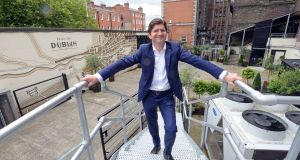 Oliver Loomes, Diageo: “We operate on an all-island basis. I think we have one of the most integrated operations of any business in Ireland.” Photograph: Eric Luke

Diageo trucks, mostly emblazoned with the Guinness logo, make the journey across the Border 13,000 times a year, says Oliver Loomes, who runs the company’s operations in both parts of the island. A hard border, if one is introduced after Brexit, could delay each by between half an hour and an hour and cost €100 per journey: “An impact on the Border will be an impact on the heartbeat of the economy,” says Loomes.

“We operate on an all-island basis. I think we have one of the most integrated operations of any business in Ireland.

The company’s concerns illustrate the potentially devastating consequences for the economy of Ireland, North and South, if the worst comes to pass.

Diageo is a hugely important company on both sides of the Irish Border producing two of the best-known drinks brands in the world, Guinness and Baileys Irish Cream.

The company’s operations on the island vividly illustrate how interlinked the economies of North and South have become and the disastrous consequences that may ensue as a result of Brexit.

Diageo is one of the largest food and drink exporters in Ireland producing beer and cream liqueur at four sites – two in the South and two in the North.

The most famous is at St James’s Gate in Dublin, the home of Guinness, and there is a Baileys plant in Dublin. There are also two important facilities in Northern Ireland – a packaging plant in Belfast for the beer business and a Baileys manufacturing plant at Mallusk near Belfast.

“St James’s Gate brewery accounts for about 35 per cent of our global beer production but 70 per cent of that production – 1.2 billion pints per annum – is exported out of Ireland to more than 130 markets across the world,” says Loomes.

A crucial aspect of this massive operation is that all of the raw materials and all of the ingredients are produced in Ireland.

“We would purchase goods and materials that go into making beer and liqueurs to the tune of about €270 million per annum. So we are one of the largest purchasers of high quality agri-ingredients in the Irish economy.”

Guinness buys about 140,000 tonnes of barley, or about 14 per cent of the national crop every year.

Baileys involves the purchase of 275 million litres of milk to go into the creation of the cream liqueur. The milk comes from 40,000 cows on 1,500 Irish farms and accounts for nearly 5 per cent of total milk production in the Republic.

The milk and the whiskey from various locations south of the Border goes North to the Baileys production facility in Mallusk and then comes back to Dublin for export around the world. The glass and the packaging also come from both sides of the Border.

Between cream liqueurs and beer there is a constant movement over and back across the Border.

As well as employing 1,200 people directly Loomes estimates that Diageo’s purchase of goods and materials support 19,000 jobs in the wider agri and service economy while its purchases of milk and barley provide livelihoods for about 6,000 farm families.

“Diageo is a great example in Ireland of how the impact in terms of free movement of goods and services across the Border would impact negatively on our business and also therefore on the wider economy and the wider communities.”

He is adamant that having that free movement on the island is a key driver of economic growth for Diageo and for the wider economy.

“We would be highly supportive of the efforts the Irish Government, the Northern Ireland administration and the Northern Secretary are placing on retaining the free movement of goods and services. That is absolutely the priority for us at this stage; keeping that Border a virtual border.”