List of speakers included a mixture of locals and walk-ins, festival artists and crew 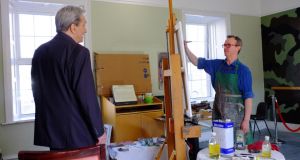 Heard in the New Jersey accent of Robert Pinsky, the words of WB Yeats sound modern and vital. On Saturday afternoon the former US poet laureate was in the parade tower of Kilkenny Castle for one of several events he has curated.

“A Favourite Poem” began life as a simple project in which Pinsky asked ordinary Americans to read aloud a favourite verse for a Library of Congress archive. Twenty years later it’s still going strong, and here the list of speakers included a mixture of locals and walk-ins, festival artists and crew.

Pinsky nearly stole his own show, with an extract from A Woman Young and Old. Iarla Ó Lionáird recalled making haycocks in the west Cork countryside, and how his father taught him what satellites were, before reading My God, It’s Full of Stars by Tracy K Smith.

Martin Hayes remembered returning to Clare from the US and meeting a friend. When asked what he was at over there, Hayes said playing music. “So you didn’t work at all?” came the bone-dry question. With this in mind, he picked Séamus Heaney’s Digging, in which Heaney struggled to reconcile his own line of work with the manual labour of his father’s generation.

Tomm Moore of Cartoon Saloon described terrifying his own children with Yeats’s words, “Come away, O human child!”, which became something of a wellspring for his company’s latest film, Song of the Sea. Across the castle’s courtyard, an exhibition explored the film’s genesis, from ideas and sketches to storyboards and Oscar nominations.

From there it was a quick dash across the road to the National Craft Gallery’s Castle Yard for a final performance of Druid Shakespeare. Four Shakespeare plays – Richard II, Henry IV parts one and two, and Henry V – have been lathed into 6½ hours, and the crowd were well prepared for the open-air theatrical feast. The wise came armed with cushions and blankets, and hip flasks were back in fashion.