Peter Robinson warns there are only weeks to ‘save Stormont’ 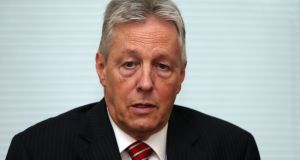 DUP Leader Peter Robinson has ended his boycott of the Northern Executive which he called in the wake of the murder of Mr McGuigan. Photograph: Niall Carson/PA Wire

First Minister Peter Robinson has warned there are only weeks to “save Stormont” following the assessment by a British government-appointed panel that the IRA army council still exists.

The British and Irish governments and the North’s five main parties are beginning to consider the fallout from the report which endorsed PSNI Chief Constable George Hamilton’s assessment that the IRA exists and some of its members were implicated in the murder of Belfast republican Kevin McGuigan.

Northern Secretary Theresa Villiers and Minister for Foreign Affairs Charlie Flanagan – who are meeting Northern political leaders at Stormont on Wednesday – have set a deadline of the end of this month to resolve the two key issues of paramilitarism and welfare reform.

The governments were buoyed by the fact that, notwithstanding that the three-member panel’s report said the IRA army council still operated, Mr Robinson has decided to seek resolution in the talks rather than walk away from the process.

To that end Mr Robinson on Tuesday ended his boycott of the Northern Executive which he called in the wake of the murder of Mr McGuigan.

He has returned as First Minister and brought his Ministers back into the Executive with him.

“We have a couple of weeks to save Stormont,” he said. Mr Robinson added that an “intense” period of negotiations must begin from today, a view endorsed by senior Dublin and London sources.

“That has consistently been my position but we do need to have a situation where we are relying entirely on political and democratic structures and there is no room for paramilitary organisations.”

In his response to the report’s findings, Deputy First Minister Martin McGuinness, said the IRA had successfully delivered on the “transition from conflict to peace” and that “Sinn Féin is now the only organisation involved in the republican struggle and in republican activism.

“There are of course enormous and urgent issues to be dealt with around the existence of armed groups, paramilitaries and criminality,” he said.

They also found the IRA still has weapons despite the statement of full decommissioning in 2005; that some members were involved in criminality; that “there have been isolated incidents of violence, including murders”; and that IRA members are gathering information on dissidents and possible informers.

More positively they judged that the IRA’s strategy has a “wholly political focus” and that the IRA “of the Troubles era is well beyond recall”.

“It is our firm assessment that PIRA’s leadership remains committed to the peace process and its aim of achieving a united Ireland by political means,” they said.

Meanwhile, a new Garda report has concluded that some former PIRA members are now engaged in organised crime in the Republic for personal gain but that it has “withered” year on year, to a much greater extent than in the North.

Nursing home residents expected to be allowed one visit a week 08:35
Covid-19: Hairdressers, gyms and religious services could return next week 08:21
Vicky Phelan considers move to US for experimental drug trial 07:52
Exiting Level 5: Ministers to push for reopening of shops, restaurants and churches next week 03:53
Demand that barristers repay Covid grants may be unlawful 03:10