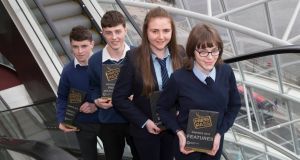 Journalists should stay independent, keep their integrity and stay out of political movements, Minister of State Finian McGrath has said. The people want “truth, honesty and integrity in the media”, he said and when readers engage with newspapers, they engage with society.

Mr McGrath, who has special responsibility for disabilities, said he had been subjected to hard questioning himself recently but saw it as part of his role as a politician.

He said there was a desire among the public for good journalism with subscriptions to the New York Times rising tenfold since Donald Trump was elected as president of the United States.

Mr McGrath was speaking at an event to mark the NewsBrands Ireland Press Pass initiative, which celebrated the work of 8,000 transition year students.

Sixteen of those students were awarded for their original journalism, created as part of the Newspapers-in-Education programme. Some 70,000 students have participated in the programme in the past five years.

The overall winner was Tomás Ó hUallacháin from Pobalscoil Chorca Dhuibhne in Dingle, Co Kerry. He wrote a story about Tomás Mac an tSaoir, who cycled half way across the US in memory of teenager Donal Walsh, who died from cancer in 2013.

Prof John Horgan, the chairman of the judging panel, praised his work saying that from a “deceptively low-key introduction, he engages us and our imaginations in a fascinating story, through short paragraphs which keep the reader racing ahead to a conclusion which ties up the events of the narrative in a way many professional journalists would salute”.

Prizes were awarded in five categories. Kate Ní Dhubháin from the same school as the overall winner won in the newspaper category.