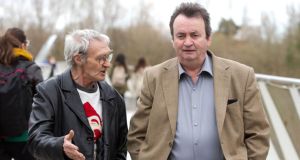 Fellow miscarriage of justice victim Paddy Joe Hill has blamed prison conditions for the early death of Gerry Conlon who died this morning.

Mr Hill, who was one of the Birmingham Six and spent 17 years in prison, said the experience of living in a cold, damp cell and solitary confinement for years had taken its toll on his friend.

Mr Hill revealed that Mr Conlon had a long-standing condition, pulmonary fibrosis of the lung, which had been exaserbated by pneumonia and a bad chest infection in the last four weeks.

His health had deteriorated recently and he had a heart attack several weeks ago. Mr Conlon turned 60 in March.

Mr Hill said: “The cells we were in were like ice boxes during the winter and ovens during the summer. In the old prisons, the damp ran down the walls. I’ve no doubt this affected his health.”

Nevertheless, Mr Hill said he was “gutted” to be contacted by Mr Conlon’s sister Anne to say that Gerry had died.

“I was speaking to him only last week when he was in hospital. He said to me, ‘give me a week until I come out of hospital and you can come over and visit’ so I said OK.”

The pair had travelled the world together speaking at conferences and campaigning on the issues of miscarriages of justice.

Mr Hill said he had last seen Mr Conlon at a conference in Limerick in March and he had been in “great form”.

Mr Hill maintained the strain of being in jail for so long was compounded by the lack of help given them when they emerged from jail.

He said the well-known psychiatrist Professor Gordon Turnball, who specialises in post-traumatic stress disorder, had offered to treat the Birmingham Six, Guildford Four and Maguire Seven after they emerged from prison, but this had been turned down by the Ministry of Defence (MOD) in the UK.

Mr Conlon did receive a financial compensation package from the British Government for his ordeal in prison, but Mr Hill said that he could not cope after leaving prison.

“As far as I’m concerned he (Gerry Conlon) got a pittance. Because of the pain he was in, he got involved in drink and drugs unfortunately,” he said.