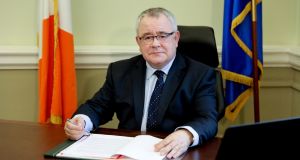 Seán Ó Fearghaíl, Ceann Comhairle: “That was a decision that the Public Accounts Committee made itself and it is empowered to make these decisions”.

The Public Accounts Committee (PAC) was “treading on embers” when it decided to investigate spending in Áras an Uachtaráin in the run-up to the presidential election, the Ceann Comhairle has said.

Seán Ó Fearghaíl also said the operation of the committee system in the Oireachtas needs to be reviewed, with many committees operating outside their areas of responsibility.

The PAC came in for criticism last year for what some claimed was a breach of the traditional constitutional position that the president is not answerable to either house of the Oireachtas.

In an interview with The Irish Times, Mr Ó Fearghaíl said of the PAC: “They were treading on embers at that point by involving themselves in that subject in the run-up, in fact in the course of a campaign.”

Fianna Fáil TD Seán Fleming, the chairman of the PAC, has said it now intends to examine presidential spending every year, as it does with government departments and State agencies.

Mr Fleming and other members of the PAC had argued that their examination focused on the overall spending by the office of the president and was not directed towards Michael D Higgins personally.

A focus of the PAC hearing in September was an annual allowance of €317,000 paid to the President. Last month, Áras an Uachtaráin for the first time published a breakdown of how the €317,000 presidential allowance has been spent since President Higgins first took office in 2011.

It offered some detail on how it was spent on Áras in-house events, foreign travel representing the country and “books, stationery and research”. It also said an unspent portion of the allowance – a cumulative €238,443 – from Mr Higgins’s first term will be returned to the exchequer.

Mr Ó Fearghaíl said that, despite its own misgivings, the PAC can make its own decisions.

“That was a decision that the Public Accounts Committee made itself and it is empowered to make these decisions but, personally, it would have been better I think if it didn’t emerge as an issue in the course of the election campaign. I can’t decide what their agenda is.”

Recent years have seen a number of Oireachtas committees double up on some issues. There was a clash last year between the chairs of the Health Committee and the PAC over who should examine the CervicalCheck controversy.

Mr Ó Fearghaíl, a Kildare South TD, said the committee system should be reviewed when the current Dáil reaches the end of its term, expected to happen in the first half of 2020.

“I would think at the end of this term, we should do an overall review of the operation of committees with a particular reference to ensuring that committees stick to their brief. Some committees have had a tendency to wander outside their brief or in fact believe that their brief is such that they can look at anything they want to on any given day,” he told The Irish Times.

The PAC has also been subject to claims that it is too aggressive in its approach to witnesses who appear before it.