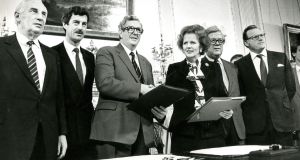 Garret Fitzgerald and Margaret Thatcher with ministers Peter Barry, Dick Spring, Geoffrey Howe, and Tom King at the the signing of the Anglo Irish Agreement at Hillsborough Castle, Co Down, in November 1985. File photograph: Matt Kavanagh 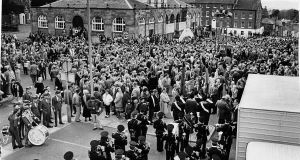 The Orange Order protest rally against the signing of the Anglo-Irish Agreement at Hillsborough Castle. File photograph: Matt Kavanagh 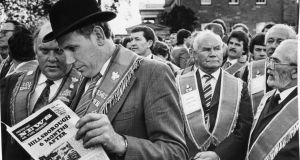 Loyalists taking part in the Orange Order protest rally against the signing of the Anglo-Irish Agreement. File photograph: Matt Kavanagh

Noises off: Ian Paisley “and his crowd” are at the gates, howling in protest.

Inside the castle, Margaret Thatcher, “always soothed by domestic detail”, tries to calm her nerves before signing, in public, the Anglo-Irish Agreement with the then taoiseach, Garret FitzGerald.

The British prime minister “busied herself moving the flowers about and rearranging the furniture, making FitzGerald and [British foreign secretary] Geoffrey Howe help her.

“She carefully checked [that] the picture on the wall behind the table at which she and the Taoiseach would sit [for the signing] had no overly green or orange connotations, and was relieved it was an 18th century view of Windsor Castle . . .”

Thus does Charles Moore describe the high point of Anglo-Irish relations during Thatcher’s tenure in office, a high point she came to regret. The description is but one of many vivid details in Margaret Thatcher The Authorised Biography Volume Two: Everything She Wants, the second instalment of Moore’s vast examination of her career, out this week.

The book is replete with footnotes and source notes, from which it is clear he has had extraordinary access to papers and participants, not least in the chapter on the negotiations that led to the agreement, which were interrupted, but only slightly, by the Brighton bombing.

Thatcher’s flaky grasp of Irish history is illustrated in a vignette from early 1984 when, at her official retreat, Chequers, she discussed Northern Ireland with James Prior, her Northern Ireland secretary, and Geoffrey Howe. According to Goodall, Thatcher was wont to put forward various ideas about the North “which everyone else tried to squash”.

“The prime minister asked why arrangements could not be made to transfer those members of the [Northern Ireland] minority community who did not wish to remain under British rule to the Republic,” according to Goodall. “After all, she said, the Irish were used to large-scale movements of population. Only recently there had been a transfer of some kind.

When negotiations leading to the agreement deepened and the Irish were pressing for a consultative role and a permanent office in Belfast, Thatcher likened Dublin’s approach to 1930s Berlin’s attitude to ethnic German minorities beyond the country’s borders.

“Why should the Irish have such a thing?” she asked Goodall, according to his unpublished memoir. “How would you like it if there was a Russian representative in London who had to be consulted about everything?” To which Goodall responded: “Well, prime minister, 30 per cent of the population of the United Kingdom aren’t Russian.”

“I see,” retorted Thatcher, “It’s like the Sudeten problem” – a reference to the pretext for Hitler’s 1938 invasion of Czechoslovakia.

According to Moore, Thatcher was “instinctively protective of anything and anyone who, as she saw it, was assailed for being British”. “From time to time, she would put forward the idea of a fence, built all along the [Irish] Border, with what she called an ‘access corridor’.”

But, Moore notes, “no colleague ever gave countenance to her notion”.

Moore writes that Thatcher distrusted Charles Haughey but developed a fondness and respect for FitzGerald, despite finding his manner of speaking trying.

According to Lord Powell, the former Charles Powell, a Downing Street adviser to her, at one meeting with FitzGerald, she fell asleep.

“Just keep talking,” urged Powell, “I’ll write it all down.”

FitzGerald was “a man of many words”, according to Thatcher, “a significant proportion of which she could not hear because of his quiet voice and rapid flow”, writes Moore.

Queen Elizabeth, claims Moore, quoting what he describes as private sources, once said: “I’m glad that Mr FitzGerald isn’t one of my prime ministers. I can’t understand a word he says.”

The head of the Cabinet Office at the time of the negotiations, Sir Robert (now Lord) Armstrong told Moore that Thatcher liked FitzGerald and thought him an honest, decent man – “she felt motherly towards him: she wanted to stroke his curly hair”.

Moore, who is a unionist by conviction and was strongly critical of the negotiations and agreement during his tenure as editor of the Daily Telegraph newspaper, attributes Irish success in the talks to the pro-Dublin sympathies of Armstrong and Goodall, whom he suggests conspired, in effect, against their own prime minister.

“I was always thinking about Ireland,” Goodall told Moore in an interview, “so was Robert Armstrong.” Goodall, writes Moore, was “a cerebral and almost saintly Roman Catholic of partially Anglo-Irish Protestant descent”.

Goodall and Armstrong’s conversations during the negotiations were mainly about how to handle Thatcher, according to Moore. Powell told Moore that Thatcher didn’t trust Goodall. “David she always suspected because he was a Roman Catholic,” he said.

Moore writes that the Brighton bombing, in which the IRA murdered five people, all civilians, and wounded 31 others, had no substantive effect on the negotiations.

“There is no evidence that anyone suggested to Mrs Thatcher that she seize the moment to insist on stronger security measures. There was no campaign to use the bomb to show the world that the IRA was the common enemy. Instead, after the slightest of pauses, the machine of negotiation rolled on as before, almost as if nothing had happened,” writes Moore.

Moore suggests that it was the closeness of relations between Irish and British officials and the sympathies of Armstrong and Goodall that ultimately delivered the agreement, a precursor to all that became the Belfast Agreement of 1998.

That closeness is illustrated in what Moore writes happened immediately after the agreement was signed, but before the press conference, when Thatcher “was agitated and began scribbling on scraps of paper” in apparent preparation for media questions. She asked Dermot Nally, secretary to the Irish government, to tutor her, and Armstrong to do the same to FitzGerald.

Armstrong told Moore that Thatcher said: “Dermot, you ask me the questions I might have to face. Robert, you ask Garret.”

Goodall told Moore in an interview that he and others conspired to persuade her of the merits of the agreement and counter the “moments when she was being terribly difficult and unreasonable”.

“There is something tragic-comic,” writes Moore with an air of sadness, “about this image of the massed ranks of the British state behaving towards the prime minister almost as if she were a slightly mad, rich old lady who might cut them out of her will at any moment.” Margaret Thatcher The Authorised Biography Volume Two: Everything She Wants is published by Allen Lane, price £30 sterling