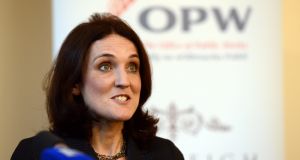 Northern Ireland Secretary of State Theresa Villiers: The funding is the first tranche of £500 million (€630 million) that is being allocated under last year’s Fresh Start Agreement to support shared education. Photograph: Cyril Byrne

Ms Villiers said yesterday the funding was the first tranche of £500 million that is being allocated under last year’s Fresh Start Agreement to support shared education.

“Anyone thinking of sending their children to an integrated school should be reassured that this is just the beginning of a substantial investment programme,” said Ms Villiers.

“Education shapes individuals and societies and this funding is a fresh demonstration of the commitment of the UK government, working alongside the [Northern] Executive, to build the foundations of a genuinely shared future for all parts of the community in Northern Ireland,” she added.

The £43 million will fund the construction of shared education campuses at Moy, Co Tyrone; and Ballycastle, Co Antrim; and integrated school projects at Braidside in Ballymena, Co Antrim; Drumlins in Ballynahinch, Co Down; and Roe Valley in Limavady, Co Derry.

First Minister Arlene Foster said the funding marked “another step forward on the road to building a better Northern Ireland as envisaged in the Stormont House and Fresh Start Agreement”.

Deputy First Minister Martin McGuinness said that “creating a better future for all of our people is at the heart of the Fresh Start Agreement and [that this] announcement will see that future realised in communities across the North of Ireland”.