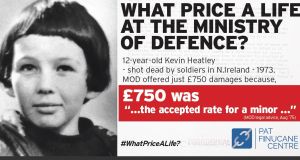 The Pat Finucane Centre says “the family of Kevin Heatley was offered a derisory £750 because this was ‘the acceptable rate for a minor’, according to the MoD”

A civil liberties group and relatives of people killed by British soldiers during the Troubles have launched a mobile advertising campaign in London challenging British prime minister Theresa May’s defence of the British army.

The Pat Finucane Centre said the campaign was launched on Tuesday in response to comments by Ms May at the Conservative party conference in September, where she complained about what she called “activist, left-wing human rights lawyers [who] harangue and harass the bravest of the brave – the men and women of Britain’s armed forces”.

She also pledged to defend British soldiers against “vexatious allegations” against them.

The Pat Finucane Centre and a number of Irish families are challenging that support for the British army by highlighting what they say was “the appalling way they were treated following the killings of their loved ones by British soldiers”.

From Tuesday until Saturday an advertising van is travelling around the streets of London focussing on the cases of Christopher Quinn, a father of five children, and 12-year-old Kevin Heatley, both shot dead by British soldiers

Kevin Heatley was shot dead by a British soldier in Newry, Co Down, also in disputed circumstances, in February 1973. The British army claimed he was killed in crossfire, while it was also claimed that an army corporal deliberately targeted the 12-year-old. A soldier was convicted of unlawful killing, a judgment which was overturned on appeal. In November the following year the boy’s father Desmond, who was suffering from depression since the killing, took his own life.

Paul O’Connor of the centre said the two cases highlighted in the “ad-van” campaign were “just the tip of the iceberg”.

“The MoD stands guilty of decades of racist and often illegal behaviour in response to wrongdoing by British soldiers. A culture of impunity still exists in respect of the actions of the British military in Iraq and Afghanistan. ”