North awaits report on IRA and other paramilitary groups

Assessment, expected Thursday, could dictate if political impasse can be resolved 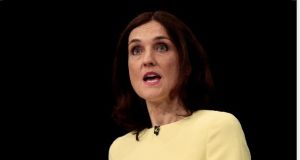 A report into the status of the IRA and other paramilitary groups expected to be published on Thursday could be critical in determining whether the continuing Stormont House talks can break the current political deadlock.

In the wake of the killing of Belfast republican Kevin McGuigan in August, the three-person panel appointed last month by Northern Secretary Theresa Villiers has reviewed the PSNI assessment of the current status of paramilitary groups.

The report, by British Liberal Democrat peer Lord Carlile, former senior Northern Ireland civil servant Rosalie Flanagan and lawyer Stephen Shaw, is due to be presented to the Northern parties on Thursday.

The panel was set up following PSNI Chief Constable George Hamilton’s assessment that the IRA still exists and that some of its members were implicated in the murder of Mr McGuigan.

After the McGuigan killing, the DUP said it could not be “business as usual” at Stormont with the result that Peter Robinson “stood aside” as First Minister and pulled all his Ministers out of the Executive, apart from Arlene Foster, who remained as acting First Minister and Minister of Finance. Earlier, Ulster Unionist Party leader Mike Nesbitt withdrew his single Minister, Danny Kennedy.

“We will look at the panel’s report. If we believe there has been substantial progress in relation to it, then we will seriously consider making that move,” she told the BBC.

Also last week, Sinn Féin’s Martin McGuinness appeared to intimate that Sinn Féin could shift on its hardline opposition to British government welfare reform – the second major issue that is threatening the future of Stormont.

This was after Ms Villiers opened up the possibility of a return to British direct rule if the welfare issue was not resolved. Mr McGuinness, in a speech to party activists, made it clear Sinn Féin was firmly opposed to direct rule. His comments triggered speculation that he was hinting that his party could be persuaded to accept an ameliorated version of welfare reform to maintain the Executive and Assembly.

Mr McGuinness said Sinn Féin would continue to oppose the British government’s “austerity agenda”, while also warning that benefits such as no water charges would be lost if direct rule returned.

Ms Villiers and Minister for Foreign Affairs Charlie Flanagan are hoping these positions indicate a potential for compromise on the part of the DUP and Sinn Féin.